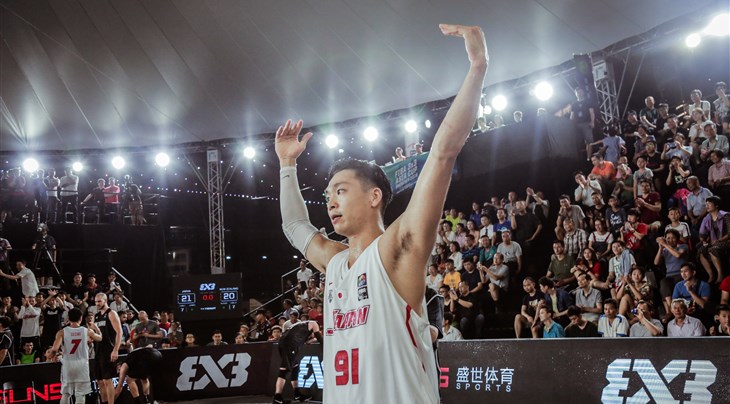 In the men’s category, Japan, Jordan, Mongolia and New Zealand were the 4 teams from Asia and Oceania, which will also compete at the FIBA 3x3 World Cup in the Philippines on June 8-12. Each 4 of these teams impressed and reached the quarter-finals in China.

Mongolia came extremely close to retain the title they had won last year at home in Ulaanbaatar but missed key free throws in the dying seconds of regulation and eventually lost in overtime (16-17) against Australia. Their star player Dulguun Enkhbat earned a spot on the Team of the Tournament.

Japan also lost a thriller against Australia, this time in the semi-finals (16-18). However they redeemed themselves to win in overtime against New Zealand (21-20) to take home the bronze medal. The crossover specialist Keita Suzuki joined Enkhbat (and MVP Thomas Garlepp from Australia) on the Team of the Tournament.

Last but not least, Jordan were a sensation in pool play in Shenzhen and convincingly took down Japan (22-14). Unfortunately, they faced the defending champs Mongolia in the quarter-finals and lost one of their top players Amin Abuhawwas in the first minutes of the game due to an ankle injury. They ended up losing 21-12. The injury didn’t look too serious and in full strength and with another month of preparation, Jordan could surprise a few teams in the Philippines.

Kyrgyzstan and the Philippines are the other 2 teams from Asia and Oceania which will play in the Philippine Arena next month. This said, none of them competed at the Asia Cup, the former due to visa issues, the latter because they decided not to register a team (same applied in the women’s category).

Remember the FIBA 3x3 Asia Cup was not a qualifier for the FIBA 3x3 World Cup. Teams qualify to the World Cup based on the FIBA 3x3 Federation Ranking (an automatic ticket is also awarded to the reigning champs and the hosts).

In the women’s category, China had a strong showing in front of their passionate fans. The speedy YingYun Li led her team all the way to a silver finish and herself to Team of the Tournament honours. Her teammate ZhiTing Zhang was a force in the paint and finished second overall in scoring. Both could not stop a sharp-shooting New Zealand team in the final (11-14).

Kazakhstan played well in the pool phase with back-to-back wins against Chinese Taipei and Turkmenistan but lost a close battle to China in the quarter-finals (13-16). The team finished 5th overall in the standings.

Turkmenistan (10th), Iran (11th) and Malaysia (12th) did not win a game in China and have a little more than a month to prepare for the World Cup.

Only solace for Malaysia: Fook Yee Yap won her second consecutive gold medal at the Asia Cup in the shoot-out contest. Maybe Malaysia is a serious medal candidate at the World Cup after all!

The rosters for the FIBA 3x3 World Cup will be announced on May 9, 2018 and the event will take place in the world’s largest indoor arena on June 8-12.

While European teams have won the last 2 editions of the World Cup (Serbia’s men back to back and Czech Republic and Russia’s women), an Asian team already won the competition (Qatar’s men in 2014). Besides, New Zealand’s men have won the FIBA 3x3 U18 World Cup both in 2011 and 2015.