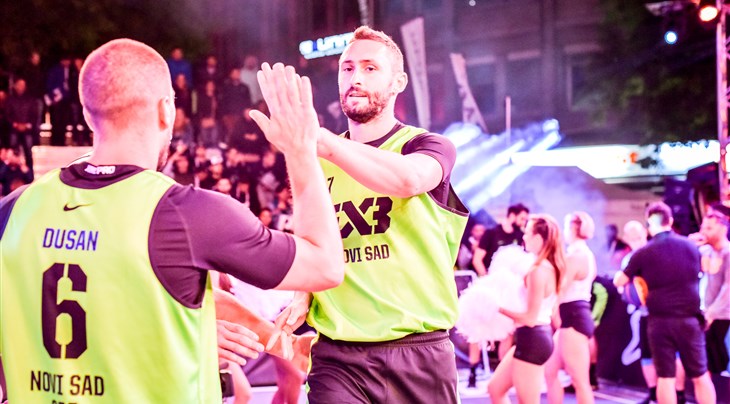 BEIJING (FIBA 3x3 World Tour 2018) - A perfect 27-0 record wasn't enough for Novi Sad Al Wahda (SRB) to secure the #1 seed at the FIBA 3x3 World Tour Bloomage Beijing Final on October 27-28, 2018. This means the 2-time World Tour winners will have to play some of their biggest rivals earlier than expected in China. Fifteen months! Novi Sad Al Wahda had topped the FIBA 3x3 Team Ranking for the last 15 months. Ironically this slide happened during a dream World Tour season where the team won a record 5 Masters on the same season. Problem is earlier in the year the Serbs completely messed up their challenger season and only secured 5 World Tour spots.

In the meantime, their new rival Liman Tesla Voda (SRB) started the season faster than TMZ and secured 8 World Tour spots, ended up winning 3 of them and won enough ranking points to leapfrog Novi Sad in the rankings.

What it means for Dusan Bulut's team:
1. They don't get to start the tournament first (and get additional practice time on the main court before the opening game)
2. They meet their historic rivals Ljubljana in the pool stage (Pool B)
3. They are seeded with Humpolec Bernard (CZE) who beat them earlier this year at the Wuxi Challenger.
4. If they top their pool, they're likely to meet a higher-seeded in the quarter-finals (2nd in Pool D where the 4th and 5th seeds are located).
5. If they reach the semi-finals, they're likely to meet a Riga Ghetto (LAT) team that beat them 3 times earlier this season.

The number 1 seed Liman Tesla Voda (SRB) finished the World Tour season on a 10-game winning streak. And all that confidence will be needed in a Pool A, that could make Novi Sad Al Wahda happy to have dropped to number 2. Liman were seeded with the only 2 North American teams of the tournament: Princeton (USA) and Saskatoon (CAN), who have won 3 Challengers apiece this season.

Pool C will also make you wanna jump in a time machine to next week with the team that has won the most Challengers this year, Riga Ghetto (LAT - 5 titles) but also Zemun (SRB), last year's champs on the exact same playground and the prodigies from Gagarin (RUS), who - at just 22 years old - already reached the final of the Prague Masters and led Russia to gold at the FIBA 3x3 U23 World Cup in Xi'An earlier this month.

Oh and Pool D, not too shabby either. Team Piran (SLO) - who also won 3 Challengers this season - get to meet Amsterdam Inoxdeals (NED) for the 4th time this season (they're up 2-1) and the team that won the 12th and final spot to the Bloomage Beijing Final, Delhi 3BL (IND).

For those of you missing the live action from Beijing (entrance is free!), we got your back. The livestream is available Saturday and Sunday next week on FIBA 3x3's official YouTube channel.