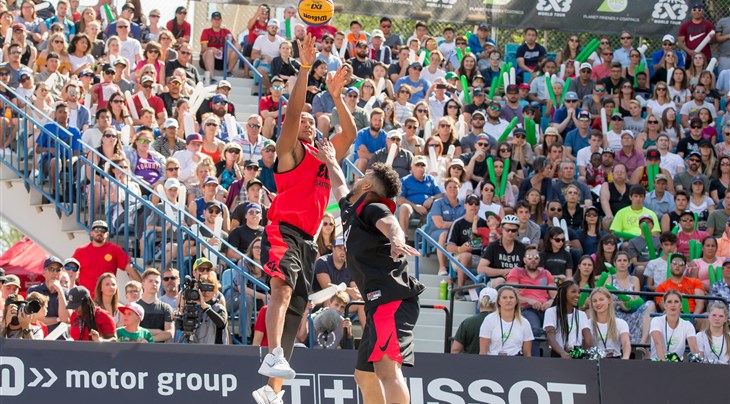 The number 5 seed defeated Montreal (CAN) in their opening game and then knocked out of the competition the number 4 seed Riga (LAT), to win Pool B and book a meeting with Minnesota 3 Ball (USA) in the quarter-finals.

Sharpshooter Steve Sir was on fire for the crowd favorites. Despite very heavy wind, the NCAA all-time leader in 3-point percentage, topped all scorers on Day 1 with 17 points, including 4 shots from outside the arc. His teammate Michael Linklater finished second with 13 points.

Novi Sad (SRB) was unstoppable in Pool A. The number one team in the world started with a 19-14 win against Winnipeg AP (CAN) before sending home their rivals Princeton with a 21-8 slap. Dusan Bulut earned Player of The Day honors after finishing with 12 points, including a few gems.

The number 2 team in the world Liman Tesla Voda (SRB) dominated Pool B. They will be joined by Minnesota 3 Ball (USA) in the quarter-finals. FIBA 3x3 World Tour reigning champs Zemun (SRB) finished on top of Pool C, with Old Montreal (CAN) in 2nd position. Surprisingly, Ulaanbaatar (MGL) were eliminated in pool play.

All 4 Canadian teams competing at the Saskatoon Masters advanced to the knock-out rounds.