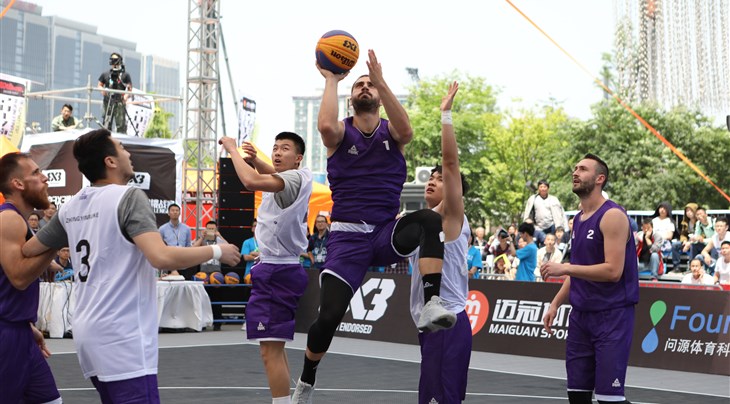 3x3 star Dusan Bulut makes his return to Nanjing, where he broke the Internet last year with a sick ridiculous shammgod between the legs.

The 2-time FIBA 3x3 World Tour winners will be looking to stop a cold streak on the 3x3 circuit. Their last title dates back to September 8, 2017 when they won the ING-DiBa 3x3 Berlin Challenger.

After battling with injuries all year in 2017, Novi Sad will start the season with their historic quarter of Bulut, number 1 player in the world Dejan Majstorovic, Marko Savic and Marko Zdero.

They will also bring back their historic name of Novi Sad (SRB) for the first time since they won the FIBA 3x3 World Tour Tokyo Final in 2014.

It won't be a walk in the park for the Serbs, who will have to deal with 2 other teams currently ranked in the Top 10, who both defeated them at the World Tour last year: Piran (SLO, #4) and Riga (LAT, #6).

The two best teams at the Nanjing Challenger get a chance to qualify for the Chengdu Masters on September 29-30, 2018.

Since Riga have already secured their ticket to Chengdu (via the Masters draft), the team ranked 3rd will join them in China if the Latvians reach the final in Chengdu.

The only other team who has already clinched its spot to Chengdu (via the Masters draft too) is Liman (SRB).

The 16 participating teams from 9 different countries will also compete for 20,000 USD in prize money.