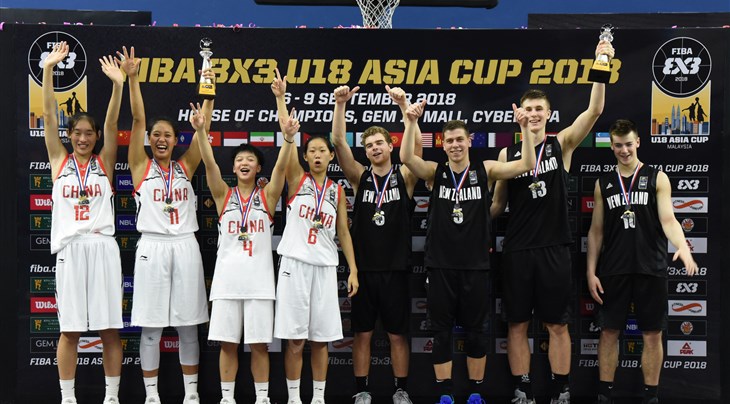 New Zealand's first appearance at the FIBA 3x3 U18 Asia Cup could not have gone better. Their men's team did not lose a single game in the tournament and bested reigning champions China in the final with a score of 22-17.

The MVP of the tournament Max De Geest topped all scorers in Malaysia with 52 points overall, including a 16-point outburst in the quarter final against Japan. Kangneng Liu (China) and Gan-Erdene Gantsolmon (Mongolia) joined the Kiwi rising star on the team of the tournament.

In the women's category, China had a perfect 5-0 record and dominated New Zealand in the final (19-12). Last year's champions Indonesia took home the bronze medal by beating Hong Kong (15-11).

The MVP of the women's category was Xianglin Wu of China, who led her team in points and scored 9 in the final . Arielle Williams (New Zealand) also made the team of tournament after leading all scorers with 45 points and was joined by Tricia Aoijs from Indonesia.

Some of the best players at the event, including men's MVP Max De Geest, will be back on the 3x3 court at the Youth Olympic Games in Buenos Aires, Argentina on October 7-17, 2018.