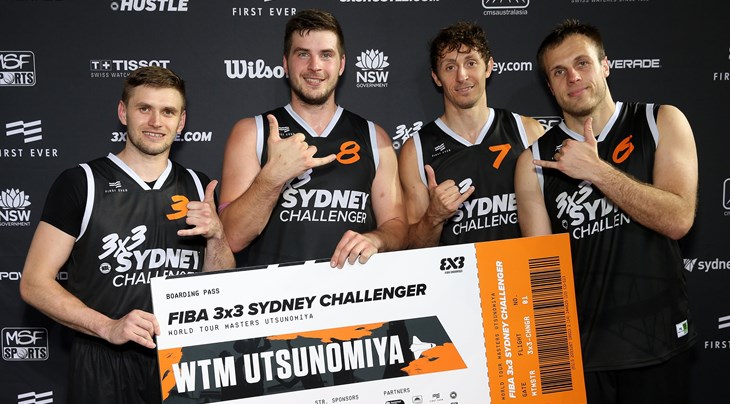 SYDNEY (3x3 Challengers) - Piran (SLO) became the first team to win 2 Challengers this season after defeating Melbourne i-Athletic (AUS) (22-9) in the final of the Sydney Challenger on May 18-19, 2018.

For the first-ever Challenger held in Australia, Basketball Australia and the NBL offered one of the most iconic backdrops in 3x3 history with the Sydney Opera House on the horizon.

The number 4 team in the world Piran was apparently inspired as it delivered a 5-0 masterpiece over the 2 days of competition.

The Slovenian team picked things up where it left off just 2 weeks after winning the Penang Challenger in Malaysia: they've now won 10 games in a row.

It didn't seem to matter that Piran were missing their leader Gasper Ovnik in Australia (replaced by 3x3 pro circuit rookie Ziga Erculj). 26-year-old Anze Srebovt took over with a top-scoring 42 points and 'the Sphinx' Simon Finzgar finished 3rd in scoring with 33 points.

Piran won every game before the limit except a 18-16 thriller against Amsterdam Inoxdeals (NED) in the semi-finals.

This means the Slovenian team now has secured 4 tickets to the World Tour this season (Mexico City and Prague based on ranking plus India and Utsunomiya via Challengers).

The other finalists Melbourne i-Athletic on the other hand will compete at their first-ever World Tour event in Utsunomiya, Japan on July 28-29. In fact they will become the first Australian team to make it to the World Tour since the inaugural edition back in 2012.

The Australian team had a heroic performance on the second day of competition in Sydney. Down just 3 players, with no subs, they won back-to-back nail-biters against Lausanne (SUI) in the quarter-finals and Adjuntas (PUR) in the semi-finals. Completely exhausted, they did come back to earth in the final against the dominant Piran.

Melbourne i-Athletic are the pro version of the Australian national team, which won gold at the FIBA 3x3 Asia Cup 2018.

Five of the Top 15 teams in the world and a total of 16 teams from 10 different countries played at the Sydney Challenger.

The next Challenger will take place in Chengdu, China on May 26-27.