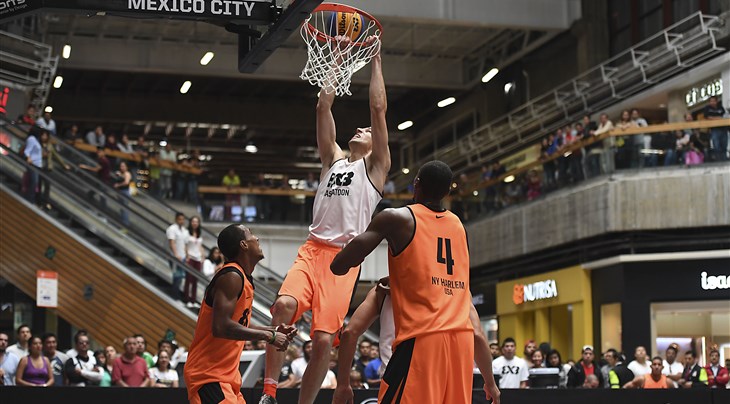 Michael Linklater & co are due to meet their North American peers from Princeton (USA) in Pool D. And if the US champions were not enough, the 11th team in the world have also been seeded with the winners of a qualifying draw, which includes Brazilian powerhouse São Paulo DC. Both Princeton and São Paulo DC are in good form: they just met in the final of the ING DiBa 3x3 Berlin Challenger last weekend!

A former Mexico Masters winner will make the trip to the Perisur Shopping Mall again this year. Two years after scoring one of the best game-winners in World Tour history, Wil Martinez returns to the World Tour with an ambitious Team Ponce (PUR). They will be joined in Pool C by 2 experienced teams: 2-time World Tour winners Ljubljana (SLO) and Delhi 3BL (IND), whose 1-2 punch of Inderbir and Bikramjit Gill lost to Ljubljana in the title game at the World Tour Final 2016 in Abu Dhabi.

Pool A will feature 2 teams who fell just short of the title in Mexico the last 3 years: NY Harlem (USA) finished 2nd both in 2015 and 2016 and just got USD50,000 richer at the 3 Ball event in California in August. Team Piran (SLO) will be the number 1 seed in Mexico. They actually beat their nemesis Novi Sad Al Wahda (SRB) for the 1st time at the World Tour last year in the Perisur shopping mall. They finished 4th overall in 2017. Team Bahia Blanca from Argentina will join the party.

Amsterdam Inoxdeals (NED) will be the team to beat in Pool B. Without any Serbian teams around in Mexico, the number 6 team in the world have a clear path to the knock-out phase, with Rio Janeiro (BRA) and Villa Maria (ARG) also in the pool.