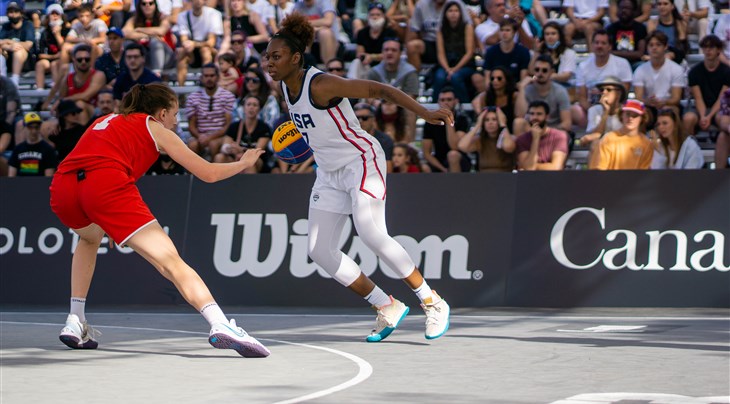 MIAMI (United States) - The women’s side of the first FIBA 3x3 AmeriCup to be held November 12-14 at Bayfront Park in Miami, Florida features teams with varying international experience including the first-ever 3x3 Olympic champions.

The Canadians come to Miami with as much international experience as any country in the field. Coming off a second-place finish at the FIBA 3x3 Women's Series Final in Romania, the Canadians look to plant their flag a top the Americas 3x3 world.

The reigning Olympic 3x3 champions take the court on home soil looking to maintain their place as the dominant basketball country in the hemisphere. None of the Tokyo gold medalists will be in Miami but the talent is still there, with players like (WNBA 2021 most improved player) Brionna Jones, Cierra Burdick, Kelsey Mitchell, and Alexis Peterson.

As with their Chilean counterparts, the women’s team is young and talented. Ranked atop the world’s FIBA 3x3 U18 rankings, Chile looks to make quite the impression in Miami before participating in the Junior Pan American Games in Cali, Colombia later in November.

Basketball tradition rich Brazil has appeared in the first two editions of the FIBA 3x3 World Cup in the women's category. The men were close to clinch their ticket to the Tokyo Olympics. The women have Paris 2024 on their radar.

The Dominicans will field one of the youngest but yet one of the most experienced squads in Miami after competing in the FIBA 3x3 U23 World Cup 2019 in China and taking the bronze medal at the 2019 Pan American Games in Lima, Peru.

Mexico took part in the inaugural FIBA 3x3 World Cup in 2012 as one of five countries from the Americas to do so but had to wait till 2019 to make a comeback on the 3x3 scene at the FIBA 3x3 U18 World Cup, where they finished seventh. Mexico has a growing love of 3x3 showcased by the big crowd attending the FIBA 3x3 World Tour Mexico City Masters every year.

There is too much love of basketball and tradition in Argentina for them not to compete at the highest levels. The Argentines have appeared in more FIBA 3x3 World Cups (five) than any other country in the Americas and finished sixth at the FIBA 3x3 U23 World Cup 2018 held in China as well as taking the silver medal in the 2019 Pan American Games in Peru.

Along with Team USA, Uruguay was the only other country from the Americas represented in the FIBA 3x3 Olympic Qualifier 2021 in Graz, Austria. Valuable experience was gained there playing three of the world’s top 10 teams.

Lots of love for 3x3 in Puerto Rico. A mix of young talent and veterans will take to the court in Miami for a country who finished sixth in the FIBA 3x3 World Cup Qualifier 2019 at home in San Juan.

Venezuela has international 3x3 experience, most of that coming in the last four-years where they competed in the FIBA 3x3 World Cup 2017 where they finished 18th but also won gold in the 2018 South American Games defeating rival Argentina.

President of the National Basketball Federation of Trinidad and Tobago (NBFTT) Clair Mitchell is excited to compete in Miami. Like many countries in the Americas and around the world, the COVID pandemic slowed T&T’s 3x3 progress. Now they are anxious to see what they can do.

3x3 is in its infant stages in Guatemala as players are transitioning from basketball and adjusting to the new style of play that 3x3 provides. A young team will represent their country in Florida.

Jamaica sees the basketball landscape moving towards 3x3. Local tournaments and other competitions such as AmeriCup will be used to gain FIBA points and help increase the exposure of the sport on the island.

Patrick Haynes, General Secretary of Guyana Amateur Basketball Federation (GABF) as well as his team have been hard at work to get ready for Miami and future events as Guyana goes all in on 3x3 basketball.