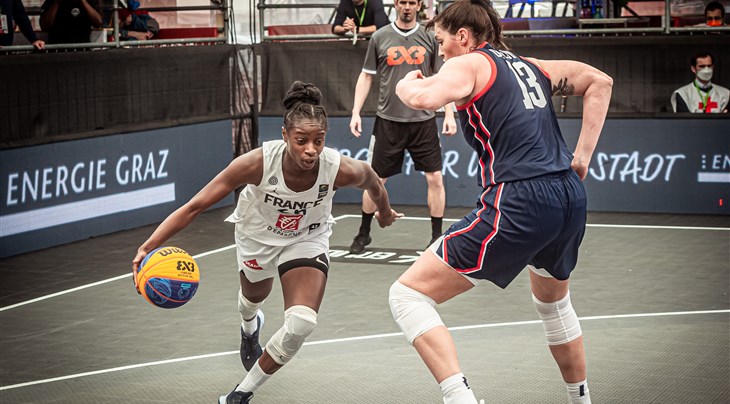 TOKYO (Japan) - Our 3x3 expert Austin Schindel comes up with his power ranking of the 8 women's teams going for gold in Tokyo.

How can we possibly argue against USA as the top team heading into the Tokyo Games?

They went undefeated at the Olympic Qualifying Tournament in May. They won all their games before the 10-minute limit. Kelsey Plum was wheeling and dealing, picking up the 3x3 format with ease. Add in Stefanie Dolson’s inside-outside game and Allisha Gray’s relentless scoring, there is not a weak link on this team.

Unfortunately, Team USA will have to play without Katie Lou Samuelson, who will not travel with the team due to contracting COVID-19. She’ll be replaced with Jackie Young, who previously repped the US in 3x3 at the 2019 World Beach Games.

Expectations are high, but the ceiling is higher for the USA.

It feels a little controversial listing France as the number two team coming into the event. After all, they have four of the top 5 players in the world, including world number one, Laetitia Guapo.

The razor edge difference in the rankings between the USA and France comes from their one meeting at the Olympic Qualifying Tournament, where France was defeated 21-17.

We hope for another medal round clash between the top two teams that are developing a world-class rivalry before our eyes.

It feels like every time we see them, they get better and better, supported by 3x3 OQT MVP Stephanie Mawuli, and dynamo Mai Yamamoto. When the number 1 and 2 U23 women’s players in the world are grooving, they're tougher to stop than a bullet train.

They went one Yamamoto shot away from beating France and earned their spot to Tokyo in a nail-biting OT against Spain and enter the event in their home country as a top contender to earn a medal.

I know what you'll say. The reigning world champs... not even in the Top 3? Think is as an automatic qualifier (based on ranking) and because of the pandemic, China have not played in any significant international basketball, dating back to 2019.

Plus, due to injuries, only Zhiting Zhang remains from that squad. They welcome two teenagers, Ji Yuan Wan and Shuyu Yang, rounding out the team with veteran Lili Wang.

We’ll know if they are contenders early, facing off against Romania, ROC, and Italy in their first three matchups, before going up against the favorites. The ROC, one of the other 4 teams that qualified through their ranking, has quietly been providing top results at the Women’s Series 2021, following years of international 3x3 success.

This said, Anastasiia Logunova will be the only player remaining from that historic World Cup - Europe Cup double back in 2017 (she was the Europe Cup MVP). The rest of the team is power to the youth with the Frolkina twins (only the third pair of twin sisters to play at the Olympics in basketball history) and Yulia Kozik, who together lost the final of the U23 World Cup 2019 against a Japanese team... that featured 3 of the 4 players who will rep the hosts at the Olympics...

It took an inspired effort from Raelin D'Alie to even be in this moment, and we think Italy are going to be a team to watch in Tokyo.

The FIBA 3x3 World Cup 2018 winners are a gritty squad that uses D’Alie’s confidence to overcome bigger, better teams when it counts the most.

After a summer of Italian sporting excellence, will this 3x3 group be the next great team to break through?

I know it looks a little low for a team that finished as the back-to-back third-place finishers at the Women's Series in Voiron and Poitiers earlier this year. And you know I can never underestimate a player whose motto is "savage mentality but namaste" like Sonia Ursu but it's a tough field in Tokyo.

Thankfully for Romania, they will also be able to count on a player in Gabriela Marginean, who's been one of the best players in the 3x3 game since 2014. They also added a key component this year in Claudia Cuic. Whatever happens, this will no doubt be the best Romanian team that ever played 3x3.

Medaling in Tokyo would be nothing short of extraordinary for Mongolia.

The country of 3.2 million people is an unlikely challenger for a team sport, let alone a 3x3 medal. But, from every corner of the globe, 3x3 has helped make dreams come true.

They’ll rely heavily on Khulan Onolbaatar, a 21-year-old who’s been selected to become the flag-bearer for Mongolia, the first-ever woman to get this honor.