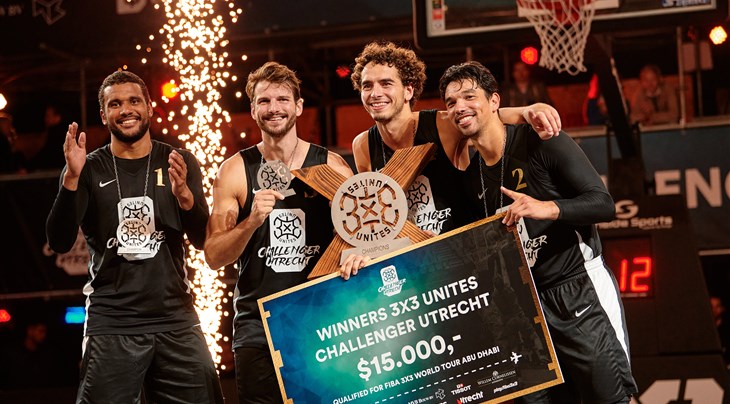 A strengthened Amsterdam Talent&Pro promised to take the leap in 2021 with the addition of ex-Liman star Maksim Kovacevic and they did exactly that by winning the Doha Masters.

But things have been a bit tougher since with the Dutchmen having near misses in Debrecen and Montreal, where they finished second to 2021 trendsetters Ub (SRB).

Back on home soil, it was no Kavacevic, no worries for Amsterdam. But they were made to work after once again falling to their emerging rival Ub in a Day 1 blockbuster - wasting an all-time performance from van der Horst who scored 14 of his team's 18 points.

But that didn't shake their confidence as 'Dimes' showed why his nickname should be changed to 'Walking Bucket' as he scored 12 points apiece in Amsterdam's quarter-final win over Raudondvaris Tauras (LTU) and semi-final beat down of Princeton (USA).

In the final, Amsterdam knew they had to lift their defensive intensity if they wanted to end Ub's win streak. The Serbs had continued to look unstoppable on offense but could not crack Amsterdam's stellar defense.

The Dutchmen played inspired and came out of the blocks faster than Usain Bolt to lead 9-1. They withheld the inevitable Ub comeback as van der Horst fittingly finished with a game-high 7 points to collect a deserved MVP after an insane 53 points across 5 games.

Ub had more Ws than the world wide web recently and their hot streak looked like continuing as they stormed to the final.

These spectacular Serbs looked like they were in video game mode and were collectively on fire with hot shooting from almost every spot on the court.

Unsurprisingly on a team featuring ex-Novi Sad star Dejan Majstorovic, Ub were playing with the type of confidence and swagger reminiscent of Novi Sad's prime years.

But all good things come to an end and Ub's 14-game win streak on the pro circuit came to a halt with an ice cold performance matching compatriot Novak Djokovic in the US Open final.

They tried their best to rally back after a big early hole but fell short against Amsterdam who are becoming one of their main rivals on the pro circuit.

Ub may have lost but their standing as the 2021 powerhouse remains intact for now.

Balanced Ub: What makes Ub so dangerous is that they don't rely on just one or two stars.

They were without Debrecen Masters MVP Miroslav Pasajlic but it didn't matter with all of Ub's players scoring at least 20 points across the five games.

Strahinja Stojacic continued to make a case for being the best sibling in his family right now - no mean feat when his older brother is 3x3 great Stefan Stojacic aka 'Mr Robot - as he scored a team high 28 points to finish third top scorer overall.

There was more hype for the final between the favorites than the new James Bond film No Time To Die with Amsterdam hoping to kill off Ub's winning streak.

Dimeo van der Horst had basically been a one-man show in Utrecht but he would need support in the final. Arvin Slagter put his hand up with an early two-piece and an energetic Amsterdam impressively put out the stops on D as Ub uncharacteristically went cold.

Van der Horst got busy inside to score three quick buckets as Amsterdam soared out to a quick 9-1 lead with the local fans making noise like it was New Year's Eve.

But you knew Ub wouldn't just roll over and they went down low to Marko Brankovic to end their scoring drought. They slowly chipped away at the deficit as the home side became nervous and the crowd were put on mute.

A Dejan Majstorovic step back 2 capped a 6-0 Ub run and cut Amsterstam's lead to 15-13 with less than 2 minutes left.

But their big comeback seemed to tire Ub who once again went cold as, fittingly, van der Horst called game with a bank shot in the dying stages.

Amsterdam hung on much to the delight of the home fans who had regained their voice.

Amsterdam Talent& Pro and Ub join world No.1 Liman (SRB), No.2 Riga (LAT), Antwerp (BEL) and Utrecht (NED) as the first teams to qualify for the Abu Dhabi Masters on October 29-30.

- The surprises continued on the pro circuit with 8th seed Bielefeld TSVE reaching the semis having beaten No.3 seed Princeton in a Day 1 thriller. Qualifier Girona also turned heads after beating No.5 seed Lausanne Sport (SUI) and No.6 seed Ulaanbaatar MMC Energy (MGL)on Day 1 before falling to Bielefeld in the quarters.

- The much-hyped semi-final between Amsterdam Talent&Pro and Princeton was faster than Snapchat lasting just 7"51' in the second quickest game of the tournament.

- To the surprise of no one Dimeo van der Horst dominated the stats with the leading scorer also topping best player value (26.7) and most highlights (15).

- Ub may have fallen short but their impressive firepower was on full display as they scored 21 points in every game leading to the final before a stingy Amsterdam impressively limited them to just 13 points in the decider.