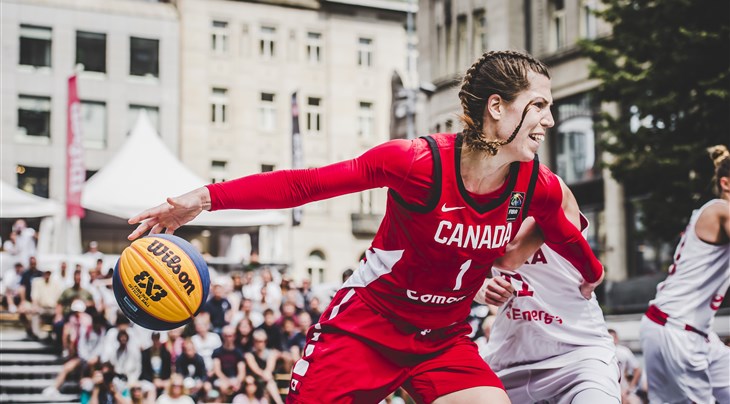 MIAMI (United States) - Summertime has always been Katherine and Michelle Plouffe’s favorite time of the year. The Canadian twins played at different universities in college and for different pro teams as well but 3x3 brought them together in the summer.

Because the inaugural FIBA 3x3 AmeriCup tournament hosted in Miami, Florida from November 12-14 is in the fall – only Michelle will travel south with her teammates to take on the Americas' best women’s teams.

"I was super pumped when they announced that we were going to have one (Americas tournament)," Plouffe said heading to training. "The Europe stuff is happening for the past few years, even in Asia. I think even in Africa has happened potentially. I'm excited to see what teams are going to look like and how they're playing. I'm sure Puerto Rico is going to have a decent team and you know USA will be good. I mean, Miami is not a bad place in November either."

Plouffe leads a Canadian team that is very experienced on the 3x3 world stage. Paige Crozon and Catherine Traer were on Plouffe's team that finished second overall in both editions of the FIBA 3x3 Women's Series in 2019 and 2021. Kacie Bosch has been on the Canada 3x3 radar for some time and has now finished her collegiate career at the University of Lethbridge after beginning her career at Gonzaga.

Plouffe’s basketball experience was very successful as she had a pro career overseas and opportunities to represent her home country twice in Olympic competition (2012 in London and 2016 in Rio). She won gold in various other tournaments like the 2015 Pan American Games and in that same year the same result at the FIBA Americas Championship.

Her transition to 3x3 was due to a few factors but one thing has been the constant – the chance to continue to wear the maple leaf, the red and white, and to play with her sister.

"I stepped away in 2018 from the basketball team. I just felt like it was time to step away for me. I just wasn't enjoying it as much as I used to," Plouffe explains. "At that exact time, I saw 3x3 and the opportunity there was to start a women's team because there were no women competing here at home. At that point, the Women's Series was created. So, Katherine, Paige and I were the squad from the jump. We wanted to be trailblazers."

"I think there is a great opportunity ahead of us and that continues with the AmeriCup in November. Besides, can you really say anything bad about a tournament in Miami in November when you live in Alberta, Canada?"