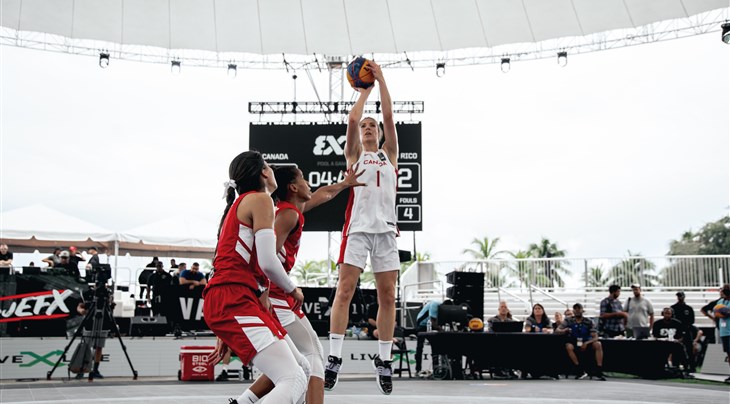 MIAMI (United States) - Canada's women and USA's men showed why they were among the favorites to win it all on the opening day of the first-ever FIBA 3x3 AmeriCup in Miami on November 12, 2021.

Canada's women conceded only 10 points in 2 games on Day one of the first-ever 3x3 AmeriCup. The #1 seed, led by Michelle Plouffe with 16 points, proved unstoppable for Puerto Rico and Uruguay and topped women's Pool A after pool play.

In the men's side, it was World Cup 2019 winners USA who impressed the most. In their opening game against Mexico, all 4 players scored at least 5 points - Charlie Brown Jr got 7 - and both Barry and Maddox had a double-five in points and rebounds.

Special mention to Jamaica's men, who made it all the way from the Qualifying Draw to the quarter-finals after winning 3 out of their 4 games today, losing only to #3 seed Brazil, who also played incredible 3x3 on Day 1.

Mexican star Charly Zesati scored 13 points in their win over Uruguay (6/8 from behind the arc) and provided us with one of the highlights of the day with back to back no-look dimes in the first game against the United States.

Guyana made history today by competing in their first-ever FIBA 3x3 official event and Joy Brown lived up to the moment. The 28-year-old led her squad to the Main Draw and scored 20 points in the pool phase.

Oh and Charlie Brown Jr. did that:

*If you are based in USA, you can watch the event on livexlive.com/FIBA