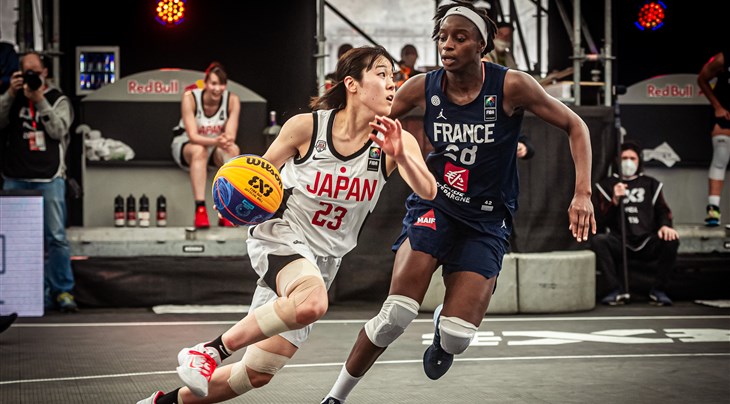 TOKYO (Japan) - We had a waaaaaaaaaaaaaaaaay longer list but somehow managed to bring it down to the 4 key 3x3 games to watch at the Tokyo Games on July 24-28, 2021. Disclaimer: we know, we could have included the Serbian-Latvian rivalry, a rematch of Japan vs France women, the Dutch-Belgian derby, a rematch of the World Cup 2018 final between Italy and the Russian Olympic Committee... We know as well all 4 games are played on Day 1. Just a coincidence or our little way to warn you our event will start STRONG? So many options but here's our fab four:

What a way to start the Olympics games. Japan, coming off of a thrilling Olympic Qualifying Tournament birth will face off against the ROC, a team that they are very familiar with on the international stage.

At the U23 World Cups both in 2018 and 2019, these two faced off in the finals with each squad winning once. The 2019 MVP, Mai Yamamoto is joined by Olympic Qualifying Tournament MVP, and breakout star, Stephanie Mawuli up against a star-studded ROC team.

Whether on the World Tour or the 3x3 World Cup, these teams have seen their share of epic battles. Serbia, led by Dusan Bulut and co, face off against a much different Netherlands team than in the past.

The Dutch, who finished as runners up to the Serbians at the 3x3 World Cup 2017 and 2018 are now flying high, with Dimeo "Dimes" van der Horst dishing out fancy assists like a Michelin star chef. In the last World Tour Masters in Doha, Amsterdam Talent & Pro (NED) featuring several players from the Dutch national team beat Bulut's Novi Sad (SRB) team in the final.

We can't wait for the next round in this heavyweight rivalry.

When these two teams faced off at the OQT, we knew that they were likely destined to meet again. France, the winner of the FIBA 3x3 Europe Cup 2018 and 2019, has the top-ranked women's team in the world and is breaking opponents' ankles like French bread.

On the other side, we have the United States, a team that ran the table in Graz. Kelsey Plum plays her professional ball in Las Vegas, but it's a safe bet that this is going to be one of the best matchups of the entire tournament.

Latvia have been a dominating force in 3x3 for the last few years, from winning the Europe Cup in 2017 to winning the World Tour (with the same 4 players under the name "Riga") in 2020. This said, the Batman and Robin of 3x3 - Nauris Miezis and Karlis Lasmanis - gave their fans a sweat at the OQT by losing the semi-finals against Poland. They got their happy ending by beating France in the last Olympic Ticket game.

However, it means they will have to face Poland again in Tokyo. This team. has been a problem for Latvia for years. Before the OQT, Poland had beaten Latvia at the World Cup both in 2018 and 2019. Sharpshooter Michael Hicks has been a 3x3 star for years and in Graz, he had his entire team level up like Ciara.