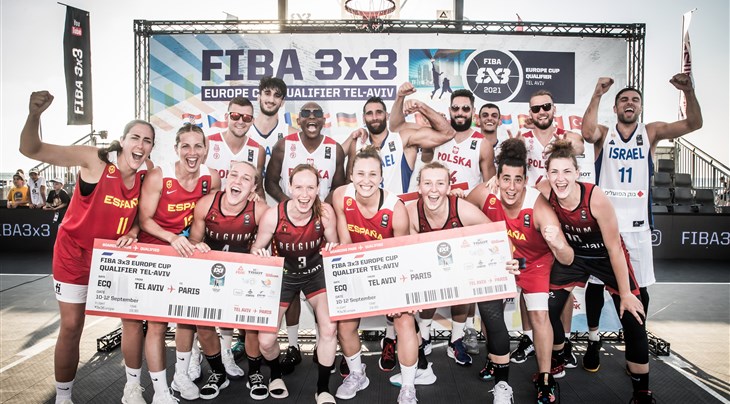 TEL AVIV (Israel) - Belgium and Spain (women) together with Poland and Israel (men) earned their qualification to the FIBA 3x3 Europe Cup 2021 on Day Two of the Israel Qualifier on June 26, 2021.

They join Israel and Germany (women), Austria and Belgium (men), who qualified yesterday.

Just four weeks after leading Poland to the Olympics, Przemyslaw Zamojski brought his country to the Europe Cup thanks to his 7.3 points per game, including 10 in the Europe Cup ticket game against Croatia (21-12).

Poland 🇵🇱 get their ticket to the #3x3Europe Cup in Paris! pic.twitter.com/IkM3Fuq0xH

With the same roster that fell short in the OQT, Spain's women booked their ticket to Paris after a 17-7 win against Poland thanks to Aitana Cuevas' 10 points. The Spanish star averaged 8 points per game in her 3 games in Tel Aviv.

Spain 🇪🇸 get their ticket to the #3x3Europe Cup in Paris! pic.twitter.com/bTD0xvsMTr

Belgium's women defeated the new team on the block Austria in a really close game (10-6) that was decided in the last minute. Laure Resimont led the Belgian Cats in scoring with 4 in the final and 19 overall in 3 games. They join the Belgian Lions in Paris after the men's team booked their ticket to Paris yesterday.

Belgium 🇧🇪 get their ticket to the #3x3Europe Cup in Paris! pic.twitter.com/l7C8zySYSa

Last, but not least, hosts Israel won an overtime thriller (18-16) against Turkey with a clutch elbow jumper from Shmuel Malcov to bring the house down. Both Israeli teams qualified to the 3x3 Europe Cup.

Israel 🇮🇱 stamp their ticket 🎟️🎟️ to the #3x3Europe Cup with the overtime win against Turkey 🤯🤯 pic.twitter.com/OVPHWsBylV

At the same time, on the Black Sea, the Romania Qualifier is taking place. Four tickets to the Europe Cup will be awarded today (June 26) and four more tomorrow, Sunday, June 27.