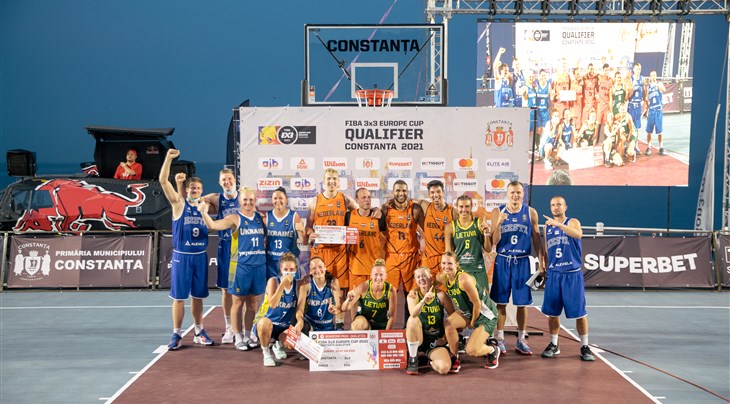 CONSTANTA (Romania) - Lithuania and Ukraine's women, together with Estonia and the Netherlands' men are the first four teams to qualify for the FIBA 3x3 Europe Cup from the Romania Qualifier, which takes place in Constanta on June 26-27, 2021

Lithuania's women will be at the FIBA 3x3 Europe Cup 2021 after a 6-year drought after defeating Sweden 18-11 in the Europe Cup ticket game. The 31-year-old Kamile Nacickaite led the Lithuanians in the game with 8 points. She finished 3rd overall in scoring with 6 points per game in 3 games.

🇱🇹 Lithuania secure their spot for the #3x3Europe Cup in Paris 🎟️🎉 pic.twitter.com/FAzLCKY8oo

In the second women's Europe Cup ticket game, the competition's bronze medalists in 2018 Ukraine took care of business with a win over Ireland before the limit (21-9) in a game they controlled from start to finish. Ganna Rulyova topped all scorers in Constanta (8.7 points per game) and had a game-high 8 in the decisive game.

🇺🇦 Ukraine stamp their ticket to the #3x3Europe Cup in Paris! 👌🎉 pic.twitter.com/wWT5VijWmx

In the men's category, Estonia will make it to Europe Cup for the first time since 2014 as they defeated 2017 winners Latvia in the Europe Cup ticket game (21-15). The Latvians, who brought a new roster for this competition, missed their one-two punch of Nauris Miezis and Karlis Lasmanis and won't be in Paris. Jaan Puidet was unstoppable for Estonia as he scored 9 points, including 3 shots from outside the arc in the ultimate game.

🇪🇪 Estonia will be at the #3x3Europe Cup in Paris after defeating 🇱🇻 Latvia 🎉⚡ pic.twitter.com/SZhOt33xUx

Last but not least, Netherlands defeated Belarus in the last game of the day to stamp their ticket to France. The Orange Lions thought they had the game under control but Belarus cut their deficit to only 2 points with 2:10 minutes to go (13-11). With 5 seconds to go, Ross Bekkering rose to the occasion with an aggressive drive to the basket to ice the game for the Orange Lions (16-13). The latest addition to the Dutch national team (who was born in Canada) led all scorers in Constanta with 7.7 points per game on Saturday.

🇳🇱 The Netherlands stamp their ticket for the #3x3Europe Cup in Paris! 🎉👊 pic.twitter.com/W1wSWd8RBA

The last 4 spots will de be decided tomorrow on Day 2 of the Romania Qualifier.