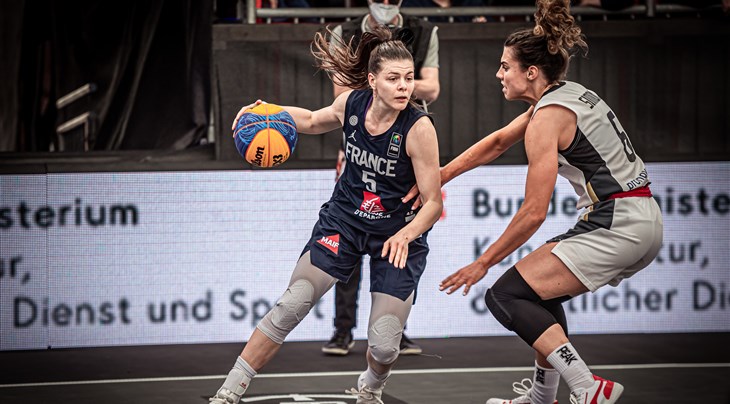 In 2008, the then 13-year-old was cheering on compatriot Yohann Diniz, who was the 50m race walk champion and favorite to win gold.

But tragedy struck for the Frenchman, who was unable to cope in the extreme humid conditions stifling Beijing and had to withdraw from the race around 30km in after experiencing stomach and leg pain.

The sheer pressure and the enormous stakes involved with performing on the biggest stage in sport resonated with the teenaged Paget. "The climatic conditions were so hard," she recalled. "I was so sad for him."

As she nears her Olympic dream, Paget of course hopes her Olympic experience will be far happier than Diniz's Beijing nightmare.

The 26-year-old has every reason to feel confident with France the 3x3 women's powerhouse having dominated the inaugural Women's Series 2019.

The break due to the Covid-19 pandemic did not stop their momentum with Les Bleues sealing a ticket to Tokyo at the Olympic Qualifying Tournament in dramatic fashion,.

After an opening loss to hoops power USA, France were unbeaten the rest of the way including thrilling wins against Hungary and Japan, where their dream was realized when Paget crossed up like she was in Notre-Dame and scored the game-wining layup.

When the buzzer sounded, France's heroes were a little stunned before partying like it was Bastille Day.

"We were on a mission and succeeded, so at first we were relieved but then so happy," Paget said.

Returning home to see her loved ones was incredibly emotional for Paget, who now has the rare honor of being an Olympian in waiting.

"They were so proud. I was so happy to see the pride and the joy in their eyes," she said.

In a team filled with superstars, it's easy for Paget to be overlooked but she is the glue that keeps France's machine rolling.

The 5ft7in (1.70m) player’s strong leadership and high IQ complements her almost flawless game where she can pretty much do everything.

Even though she is a model baller, Paget thought the Olympics would always be beyond reach but 3x3's elevated status into the big time proved a game-changer.

"For me it was of course a dream to one day go to the Olympics but I didn't think that it would be possible," she said.

"When 3x3 was accepted into the Olympics, you allow yourself to dream bigger and you do everything in your power for you to try to succeed and participate.

"And now my dream is almost true, it's crazy. I'm so grateful." In Tokyo, this super talented France outfit will have pressure on them. Anything less than a medal will be seen as underachieving although nothing is guaranteed in 3x3.

There will be a lot of expectations in Tokyo but these confident Frenchwomen aren't afraid. "In French we say: 'l'enjeu ne doit pas dépasser le jeu' - that means the pressure on this event must not get us out of our game.

"The goal is to do our best, enjoy every moment and win a beautiful medal to honor France."

If all goes to plan, it will be full circle from her first glimpse of Olympic intensity all those years ago.