Kareem Maddox is not your typical 3x3 player 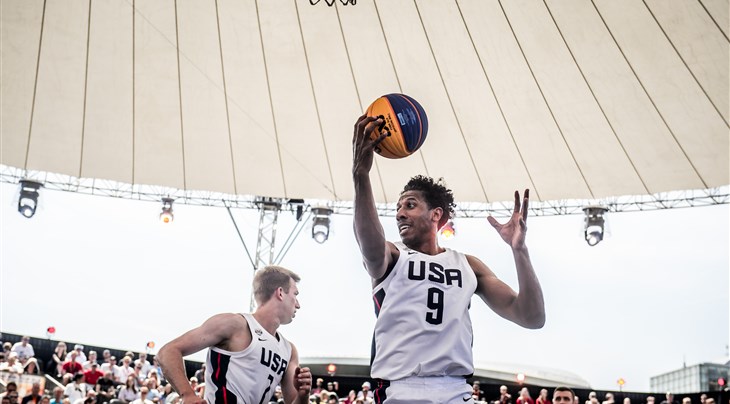 MIAMI (United States) - Beginning with a stellar career at Princeton to overseas professional basketball in Europe to pursuing his passion of audio storytelling with NPR, Gimlet and podcasting to now a successful 3x3 hoops career – Kareem Maddox is not your typical basketball player.

The California native Maddox always saw basketball as a vehicle to travel the world and experience new people and cultures.

After being named all-conference in 2011 and Defensive Player of the Year that same season, Maddox took advantage of an opportunity to broaden horizons both athletically and personally by playing in the Netherlands and United Kingdom, retiring shortly after. Taking three years to work for NPR and the very popular radio show "All Things Considered" and then returning to Poland to give basketball one last serious push. "I hadn't just spent four years in the gym. I spent four years studying my passion [in Princeton], which was English Literature, and when you leave there, you know that you're going to have some opportunities that have nothing to do with sports. So, that's kind of the thing that led me to retire from basketball after two seasons. If you want to do anything, if you want to be really great at anything, you have to dedicate yourself to it, and be afraid to fail with it and reach the heights that you really want to and I never really set those sights. I never looked at the NBA and said oh, that's something I want to do. Instead, I said I want to be a primetime host of a news program. I couldn’t have drawn up a life like this, I couldn’t have asked for a better experience really."

That experience has seen the 6ft. 8in. (2.04m) forward who was named after basketball hall of famer Kareem Abdul-Jabbar, who like Maddox is so much more than a great basketball player, travel around the world with his professional 3x3 team Princeton and for Team USA. Meanwhile, he also managed to pursue his passion and host a very successful podcast – "The Greatness with Kareem Maddox" where he interviews athletes from around the world about their Olympic dreams and experiences.

He began toying around with 3x3 as early as 2010 but in 2018 (after playing in various tournaments the years preceding) things really started to develop on the half-court. Princeton was playing on the FIBA 3x3 World Tour. Maddox was honored as MVP of the 2018 USA Basketball 3x3 National Championship. In 2019, Maddox’s journey wearing the red, white and blue began and what a year it was. He won gold medals at the Pan American Games in Lima, Peru and at the FIBA 3x3 World Cup. The United States were officially on the 3x3 scene in a big way.

When COVID hit in 2020, play stopped in the United States. Maddox and team Princeton played in just one FIBA 3x3 World Tour event that year. Chemistry and continuity are important in all forms of basketball but in 3x3 they may be the most important two things a team must have to be successful.

"I think that from the States, we will always have good talent. But what we're learning is that chemistry counts - a lot more than talent does especially when you're getting to the higher levels and especially when other teams, other countries have players who may not have played college ball but are all professionals and are talented. In many cases they have played together, the same four players for multiple years. Even though we think we'll always have good talent. I haven't seen another player like Robbie Hummel (FIBA 3x3 World Cup 2019 MVP) on the World Tour, but that only goes so far."

Maddox will lead a team with Canyon Barry, Trey Bardsley and Charlie Brown Jr. into the much-anticipated inaugural FIBA 3x3 AmeriCup on November 12-14 which is going to be quite an event.