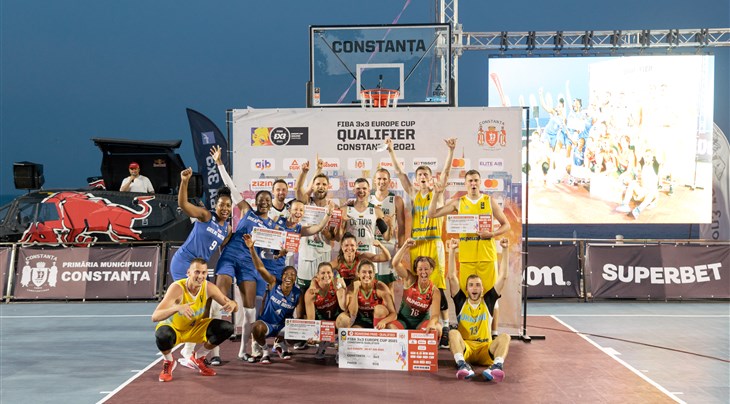 In the women's category, Great Britain will compete in their first-ever 3x3 Europe Cup after going undefeated on the Black Sea shore. Former basketball Olympians Tèmi Fágbénlé and Chantelle Handy led the team in scoring and definitely looked like a team that could do damage across the Channel after beating the 2019 semi-finalists Belarus in the Europe Cup ticket game (16-14) and the 2016 winners in their opener (17-12).

Speaking of Hungary, the team bounced back from that morning loss and clinched their spot in Paris after a hard-nosed win against Estonia (15-12). In star player Cyesha Goree's absence, Ágnes Török stepped up in the middle and led her team in scoring with 5.7 points per game.

In the men's category, 2017 bronze medalists Ukraine went 4-0 in Constanta and finished in style (19-7) against the Romanian hosts in the Europe Cup ticket game. Their one-two punch of Igor Chumakov and Denys Noskov led the way with 6.7 points per game each.

🇺🇦 Ukraine secure their spot for the #3x3Europe Cup 2021 in Paris 🇫🇷 🎉 pic.twitter.com/bT4E58MQ4Y

Last but not least, the bronze medalists of the Europe Cup's last edition (2019) Lithuania won the very last ticket to the Europe Cup before the limit (21-11) against an exhausted Great Britian team, which was playing without a sub due to injury. The number 10 player in the world Aurelijus Pukelis led all scorers in Romania. He capped off his amazing performance in Romania with a 2-pointer for the win. It was the end of a perfect weekend for both Ukraine and Lithuania, who both qualified their two teams for the Europe Cup over the weekend.