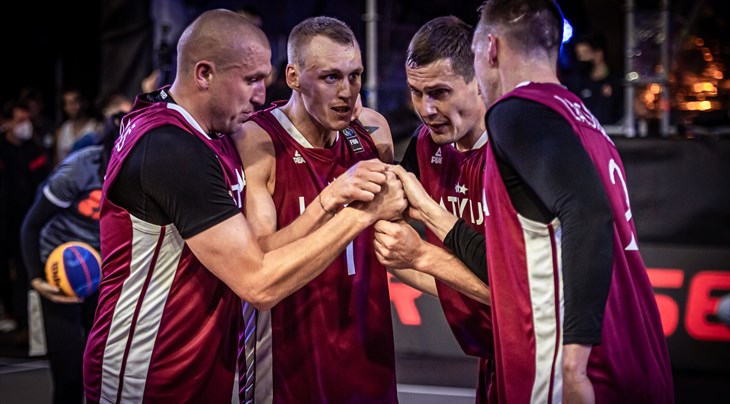 TOKYO (Japan) - As countries set their Olympic squads, Latvia’s team comes as no surprise to anyone who has followed 3x3 over the past few years.

Latvia, which goes by ‘Riga’ on the World tour, have kept their core together, through every up and down imaginable. Now, Olympic bound, Latvia has named the four players who will be going to Tokyo.

The team has been a powerhouse on the 3x3 scene ever since they won the FIBA 3x3 Europe Cup back in 2017. They won the silver medal in the last edition of the FIBA 3x3 World Cup in 2019. The 3x3 nerds will remember they continued their 3x3 domination by winning the World Tour last year as Team Riga. At the FIBA 3x3 Olympic Qualifying Tournament, Latvia went 6-1 and clinched their ticket to Tokyo after beating France (21-15).

They'll enter the Olympics in style, as Agnis Cavars will represent Latvia in the opening ceremony as the official flag-bearer. On the court, they begin their Olympics as the first men’s matchup in Japan. They’ll be going up against Poland, the same team that defeated them in the semi-finals at the 3x3 OQT and almost dashed their qualifying dreams.

The Aomi Urban Sports Park will showcase the best 3x3 action in the world later this month to crown our first 3x3 gold medalists. Latvia brings the experience and talent to get it done.