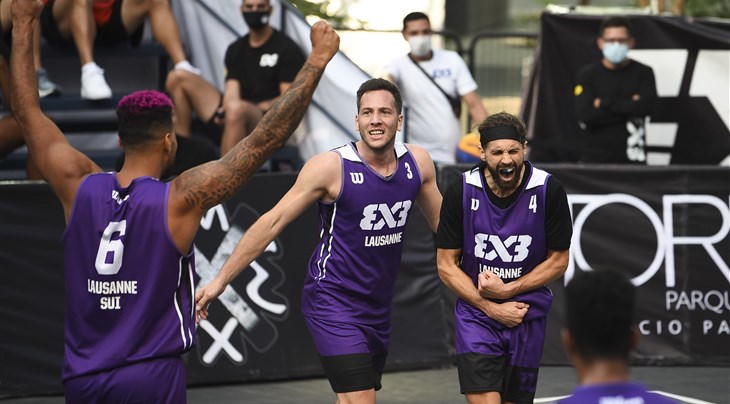 Both Riga (LAT) and Šakiai Gulbele (LTU) made light work of their opponents in the Qualifying Draw but faced tougher tests in Pool action as both were beaten by shock performances from Ulaanbaatar and San Juan respectively, and that wasn’t the end of the intrigue.

We don't recommend being a San Juan fan if you have a heart condition. The Puerto Rican squad won both their games against Sakiai Gulbele and Omaha 3Ball (USA). First Jorge Matos and then Lausanne Masters MVP Matias delivered to finish Day 1 undefeated.

With 42 points and two wins to show for their two Pool outings against the hosts and Jeddah, Lausanne had a perfect day in Mexico City as they remained undefeated and booked a place in the quarter-finals of the competition.

Gagarin await them tomorrow in the quarter-finals and the Russians will be wary of the form of newcomer Christophe Varidel as the 31-year-old was instrumental in helping the Swiss side reach the knockout stages, but Lausanne’s entire roster will be full of confidence after coming through Day One unscathed. Tune in tomorrow to see how they get on!

The 27-year-old Lithuanian was a busy man on Day One in Mexico City as he made a massive contribution across the board to help Šakiai make a strong start to the weekend.

From dominating on the interior in Qualifying Draw action to scoring from so deep he was virtually in the bleachers with the fans in Pool action, Pukelis did everything he could to help his team to a positive start. They’ll face Riga in quarter-final action tomorrow and will need their star player to be at his best if they’re to advance to the Final Four.

Riga taste defeat on Day One

What a game we witnessed between the reigning World Tour champs Riga, and the Mongolian side Ulaanbaatar MMC Energy. Just when we thought the Latvians - who also won Olympic gold just 3 months ago - would make an inevitable comeback, Ulaanbaatar delivered one of the upsets of the season.

Latvia had their fair share of fun on the court outside of their aforementioned defeat, and the confidence they’re playing with right now was demonstrated perfectly in this dime. We have no words for it – just watch and pick up those jaws afterwards!

Who can still make the Jeddah Final?

With Ulaanbaatar MMC Energy out in the pool phase, Graz (AUT) are mathematically qualified for the World Tour Final.

This is a little more complex but stay with us: Lausanne Sport (SUI) will play in Jeddah too.

Lausanne and San Juan were the only two teams to win both games on Day 1. Since the first tie-breaker for the teams losing in the quarter-final is the winning percentage, it means that the Swiss will rank 6th in Mexico City in the worst-case scenario. Sixth place means 45 points means Lausanne surpass Novi Sad (SRB) in the season standings. There remains one team in Mexico that can leapfrog them today but the Swiss would still rank 12th and earn the last ticket to the final.

Good news is we will know for sure immediately after the quarter-finals.

Coincidentally Gagarin (RUS) will face Lausanne (SUI) in the quarter-finals. If the Russians win, they go to Jeddah. If they lose but still finish in the Top 6, they will still make it.

Runa (RUS) have a mountain to climb to reach the final. They need to win their last 3 games in Mexico, get the title and hope that Gagarin don't make the Top 6,

As you know, Novi Sad (SRB) are not playing in Mexico. They will have to hope Lausanne beat Gagarin, Gagarin don't make the Top 6 and Runa don't win the Masters.