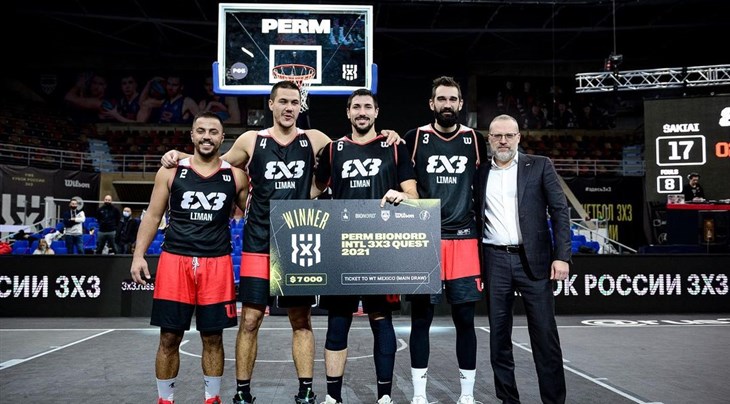 PERM (Russia) - The drought is finally over. After overwhelming success last year, Liman (SRB) finally returned to the winner's circle in 2021 at the Perm Bionord International 3x3 Quest 2021, defeating Sakiai (LTU) in the final on October 21.

The Serbians were led by Nebojsa Kilijan, Stefan Kojic, Aleksandar Ratkov, and Mihailo Vasic a foursome that came together to overcome some early season hiccups to finally walk away from a Quest event with the big check.

They were a perfect 5-0 in the event, coming out of Pool B. In the bracket, they took care of Graz (AUT) in the quarter-finals, followed by a classic battle vs. Riga in the semi-finals, ending their journey with a final matchup vs. Sakiai (LTU), another team that was desperate for a win.

In the title game, it was end-to-end domination for Liman, with Stefan Kojic beginning the game with a step-back two-pointer and concluding with a Nebojsa Kilijan two-piece to win it. Along the way, Olympic bronze medalist and Europe Cup 2021 winners Aleksandar Ratkov and Mihailo Vasic were again dominating down low and keeping Aurelijus Pukelis and the team in check.

In the third-place game, Riga outlasted the hometown favorites Moscow (RUS) thanks to their star Karlis Lasmanis. The Tokyo 2020 Olympic champ led all scorers in Russia with 40 points in 5 games, followed by Stefan Kojic (Liman, SRB - 38pts) and Darius Tarvydas (Sakiai, LTU - 37pts).

Liman now gets direct entry into the FIBA 3x3 World Tour Mexico City Masters (Nov 6-7, 2021) while Riga (LAT) and Sakiai (LTU) got a ticket to the qualifying draw in the Mexican capital.