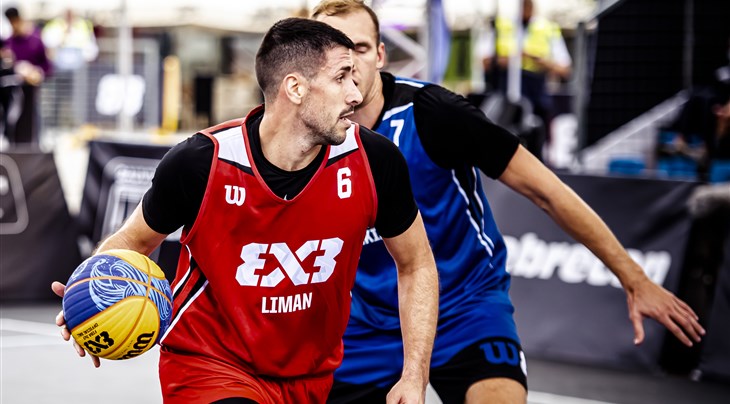 Who will win the last #3x3WT Masters of the season? 🤔

After this crazy season resumed in style in Abu Dhabi, there isn't much time to breathe with the fast and furious action heading to Mexico City - another much-loved 3x3 destination having played host six times previously.

Having fallen short in the semis in Abu Dhabi, 3x3 power Liman surprisingly have yet to taste success in Masters this season but surely will bring the heat to Mexico City. The Serbs top Pool B which features the much-hyped Gagarin and Utrecht (NED).

For just the second time this season, Liman will be at full-strength with Stefan Stojacic aka 'Mr Robot' back in the line-up and the extra scoring punch is needed against Gagarin featuring three Olympic silver medalists.

These young Russians have had a difficult year on the World Tour but finally registered their first W this season with victory over Lausanne Masters champs San Juan PCI Group (PUR) on Day 1 in Abu Dhabi.

With 25-year-old star Alexander Zuev showing off some of his dynamic game, Gagarin are regaining confidence but will need to reverse their recent form against Liman having lost to the Serbs in Prague.

Gagarin sit 15th on the World Tour standings and outside the top 12 needed to qualify for the Jeddah Final next month. They simply need a good showing in Mexico City.

Fresh off a quarter-final finish in Abu Dhabi, Ulaanbaatar MMC Energy (MGL) will be confident of once again making the knockout stages but they'll need to get through Runa (RUS) in Pool A.

More than likely, however, Riga (LAT) will be the headliner of this pool but the Latvians need to get through qualification first. They boast the same awesome foursome - who double as Olympic Gold medalists - that came back together in Abu Dhabi to win their first Masters of 2021.

With Abu Dhabi MVP Karlis Lasmanis in top gear on Flight KLM, Riga will be hot favorite to reach the main draw.

In Pool C, San Juan PCI Group will look to rebound from a winless campaign in Abu Dhabi and recapture the magic from their incredible title run in Lausanne. They will need Lausanne MVP Angel Matias to clip on his wings as the Puerto Ricans are pitted in a tricky group.

Omaha 3ball (USA) impressed on their World Tour debut in Montreal, where they almost beat former Masters champs Princeton. Led by the dynamic Dylan Travis, it wouldn't surprise to see the Americans become the latest underdog to shock the world.

The third team of Pool C is likely to be former Masters champs Sakiai Gulbele (LTU), who will have to go through qualifying.

The Swiss have only reached Day 2 once from three attempts this season and sit dangerously outside the top 12 race for the Jeddah Final. But with a determined Westher Molteni leading the way, don't write them off!

After a historic triumph in Prague, Jeddah came back to earth in Abu Dhabi with an early exit but still should be confident of making another deep run. Prague MVP Nemanja Draskovic and Kevin Corre possess a dynamic one-two punch that they plan to land with authority in Mexico City.

If we've learned anything from this incredible season, no one can be discounted. The action in Mexico City is going to be spicier than jalapeno.