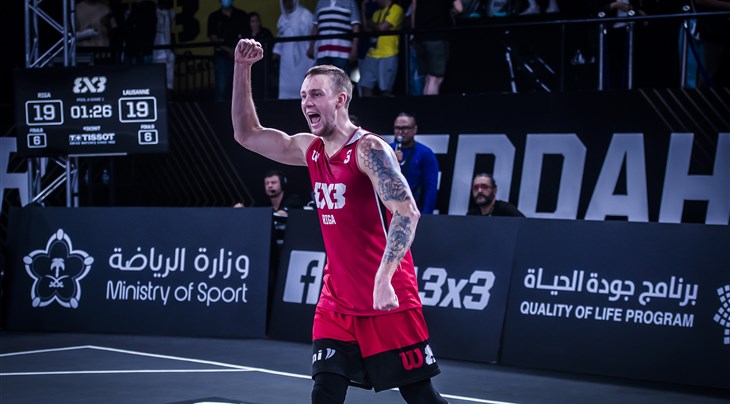 JEDDAH (Saudi Arabia) - It’s been a memorable 3x3 season, with seven Masters and the World Tour Final in Jeddah. Let’s take a statistical look back at the year and whose numbers jumped off the page.

The World Tour 2021 regular season MVP was once again the most effective 3x3 offensive player in the world. The Latvian led Riga to two Masters titles, in Abu Dhabi and Mexico City, winning MVP at both events. The lethal lefty led the World Tour in points, points per game, and shooting value while making the most free throws along the way. He can score from all levels of the court and is one to count on in the clutch. It was a year to remember for the man they call 'Batman', leading Riga to the top regular season spot in the standings and once again earning the scoring title.

This man is responsible for more IG content than your favorite model. Nauris Miezis, aka 'Robin' has been a highlight reel every time he steps on the Enlio court, helping Karlis Lasmanis get to the top of the World Tour scoring rankings with his smooth game and pinpoint passing. The Latvian is also deadly from behind the arc, knocking down more 2-pointers than anyone else this season. No matter who or where he plays, Miezis is a must-watch when he is on the 3x3 court.

Celis is one of the surprises of 2021, taking his game to a whole new level while elevating the entire Antwerp team. The top ranked man in player value per game finished top five in highlights, 1-pointers made, key assists, drive, and offensive rebounds. The man we've nicknamed 'Clerk Kent' - for he studied to become a notary outside of 3x3 - plays with high IQ and at a deceptive quickness and is the perfect complement to teammate Thibaut Vervoort. The Belgian has established himself as a nightmare matchup versus any opponent, and we're hoping to see him run it back in 2022, especially as the World Cup stops in his hometown next year. Stojacic finished the year as the number one overall player in the FIBA 3x3 individual rankings after an incredible year for Ub (SRB). With their additions this offseason, he flew under the radar and above the rim, each and every tournament. He led the field in drives and dunks, creating enough offense to score the third most points in 2021 (149). He was all over the gram this season, making his way to numerous top 5 lists and making himself a household name.

For the second straight season, Agnis Cavars led the World Tour in rebounding. While Karlis Lasmanis and Nauris Mieizis are doing their thing for Riga, the Latvian flag-bearer is doing the dirty work, cleaning up the boards and creating extra possessions for Riga. He gobbled up 54 offensive rebounds, tied for first, while averaging less than one turnover per game. The leader that holds Riga together, he led the tour in games played, with 31 and at the age of 35, he continues to show his commitment and determination to his team on and off the court. On their way to the Laussane Masters final, Ub was in a groove in their quarter-final matchup vs. Graz. The Austrian side are no pushovers, but Dejan Majstorovic and his teammates all ate their wheaties that morning, knocking down 10/11 from 1-point range, 5/10 from beyond the arc, and adding one free throw for a 21-8 win. They only needed 5 minutes and 26 seconds to take care of business, the quickest game of the World Tour season.

*All leaders with a minimum of 10 games