One question for all 3x3 men’s teams at Tokyo Olympics 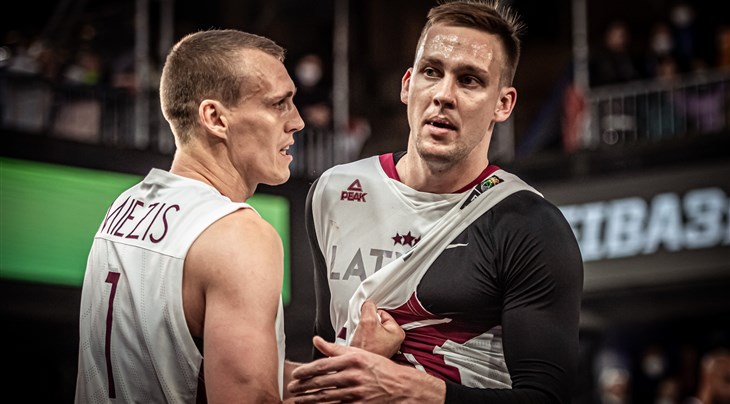 TOKYO (Japan) - It is getting so close that it's almost impossible to breathe!

But let's all take a deep breath and ask ourselves the main question hanging over the eight men's teams with their dreams on the line at the Tokyo Olympics.

Would anything other than Gold be deemed a failure?

We all know Dusan Bulut aka 'Mr Bullutproof' plays with swagger on the court. 3x3's GOAT has enormous confidence in himself and his team highlighted when he recently said that anything other than Gold would be "considered a failure".

He has a point with Serbia being the undisputed powerhouse in 3x3's first decade culminating in winning four of the six World Cups and they are currently ranked No.1.

Led by Bulut and a slew of big names from World Tour heavyweights Novi Sad and Liman, Serbia collect more Ws than Djokovic on center court.

But we've increasingly seen in recent years – as 3x3's depth and talent has risen – that favoritism doesn't mean much in this fast and furious game, where alerts aren't really needed for upsets.

Serbia deserve the favorite tag and of course would be disappointed if they fell short. A failure? No way.

Will Anton Ponkrashov get a chance to become the first player to win an Olympic medal in both basketball and 3x3?

ROC are the No.2 seed and automatically qualified to Tokyo because of their high ranking. But it's a little difficult at the moment to project if they will be one of the favorites in Tokyo given that they've only shared an extended roster of 9 players for the moment for their training camp in Vladivostok.

Will they decide to go young and rely heavily on the players who helped them win back-to-back FIBA 3x3 U23 World Cup titles in 2018 and 2019 with players like Ilia Karpenkov, Alexander Zuev, Stanislav Sharov or Kirill Pisklov?

Or will they trust players who have been in Olympic moments before like 35-year-old Anton Ponkrashov, who won the FIBA Eurobasket in 2007 and took home a bronze medal at the 2012 Olympics? At the moment Ponkrashov is the only player shortlisted for Tokyo, who has ever won an Olympic medal. How amazing would it be that a player makes history by becoming the first athlete to win an Olympic medal in both basketball disciplines on 3x3's Olympic debut?

Will China's gamble on youth pay off?

China made a statement at selection when they trusted their young guns in Tokyo with the squad filled with players 25 and under. On the biggest stage of them all there is the potential that inexperience could backfire but the faith from the selectors should instill these players with a bucket load of confidence.

They might be young in age but a couple of their stars have big game 3x3 experience with their No.1 player Haonan Li taking the world by storm when he collected the MVP in China's gold medal winning FIBA 3x3 U18 Asia Cup 2017.

And Yan Peng will be familiar to World Tour fans having admirably filled in for Stefan Stojacic aka 'Mr Robot' on Liman's star-studded team in 2019.

With youth on their side, China should be one of the most energetic and fun teams in Tokyo.

Can Japan handle the pressure?

It's always the dilemma for the host – will playing at home be a benefit or a burden? Unfortunately at Tokyo, there won't be fans in the stands but Japan should still have an advantage playing in the comforts of home.

The pressure to succeed of course will be there but Japan should feel confident with Japanese 3x3 pioneer Tomoya Ochiai hotter than wasabi after dominating at the recent Lipek Challenger, where underdog Aomi defeated world No.1 Liman.

Young gun Keisei Tominaga, who shined at the FIBA 3x3 U23 Nations League in 2019, will add the extra sizzle to ensure Japan is well equipped to deal with the rising expectations.

Does Michael Hicks have cash left in the bank?

There is no bigger stage performer than Michael Hicks aka 'money in the bank'. He stole the show at the FIBA 3x3 World Cup 2019 to lead Poland to bronze after upsetting Serbia.

Even an injured middle finger to his shooting hand didn't stop this real life 3x3 terminator from inspiring Poland's Olympic qualification in Graz.

When the lights are brightest, this walking bucket plays at his best and makes the game look almost easy – and he does it all with a smile on his face. This dude is a natural entertainer and born to play in the Olympics.

Like Ben Affleck and his gang in The Town, Michael Hicks is coming for the moneybags.

Should red-hot Netherlands be favorites?

People would have thought you're crazier than Javier Bardem in No Country For Old Men if you asked this question at the start of the year.

The Netherlands are not a tradition hoops nation but 2021 has been the year of the orange.

It started with Team Amsterdam breaking their World Tour drought with victory at the Doha Masters and it soon translated to national team success with upsets over mighty USA and France in Graz to claim the country's first ever participation in the Olympics for hoops.

Maybe the favorite tag is a stretch with Serbia and Latvia in the building, but there is no hotter team arriving in Tokyo. Dimeo van der Horst has been a star for years and forms a deadly one-two punch with new 3x3 sensation Arvin Slagter.

Ross Bekkering could emerge as the breakout star having led the team in scoring (and ranked second overall) at the recent FIBA 3x3 Europe Romania Qualifier.

Can chemistry nudge Latvia over the line?

This legendary band has been together longer than the Roots. On the World Tour, this awesome foursome represent powerhouse Riga and sped past rivals Novi Sad and Liman to the top of the mountain last year.

They basically don't even need to call plays – these guys just instinctively know what each other will do. Superheroes Karlis Lasmanis and Nauris Miezis have top billing but they are perfectly complemented by sharpshooter Edgars Krumins and glue guy Agnis Cavars, who will carry the Latvian flag at the opening ceremony.

Every team has a legit shot of taking home gold but Latvia have years of chemistry and in-built understanding of each other that no one else has.

It might just prove the difference in such a close race.

Belgium were the surprise packets during Olympic qualification having impressed in Graz before securing the final ticket to Tokyo by triumphing in Debrecen. Except a 1-point loss against Lithuania, they were 7-0 in the two Olympic Qualifiers!!!

Around all this, Antwerp has dominated the Challengers in the pro circuit to confirm this remarkable improvement.

There is no reason why Belgium can't continue their magical run as they take to Tokyo the the same four players who starred in Debrecen.

Debrecen MVP Rafael Bogaerts and Nick Celis can match it with any duo but the beauty of Belgium is that they share like they care. They have a four-pronged attack that always seem to make the right play – highly impressive since they are the new kids on the block.

3x3 is a game where dreams are made of so maybe it's fitting that Belgium – the ultimate Cinderella story – goes all the way.