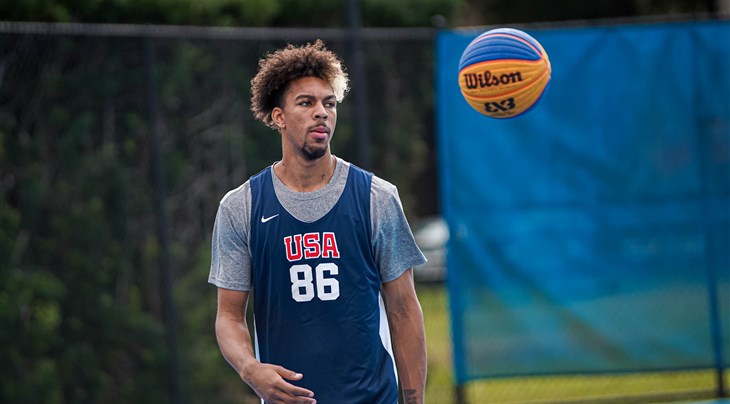 MIAMI (USA) - When his agent suggested giving 3x3 a go, recent NBA player Charlie Brown Jr. was initially skeptical until being easily swayed after obsessive research into the 21-point game.

"At first, I didn't know if (3x3) would take me away from my NBA (goals)," said Brown Jr. who played for Oklahoma City and Atlanta during the past two NBA seasons.

"My agent said it would be good for me to get into. I started researching everything such as the rules and the players."

Impressed with what his research had uncovered, Brown Jr. took part in a 3x3 camp in North Carolina and soon enough was selected in mighty Team USA's line-up for the first-ever FIBA 3x3 AmeriCup which will be held in Miami on November 12-14.

It will be a proud moment for the 23-year-old who has never represented the red, white and blue before in any form of hoops. "When my agent told me I had this opportunity, it was a very humbling experience," he said.

No.1 seed USA are in Pool A along with No.8 Venezuela and No.9 Mexico.

"We've got to show what we're about and what we represent on the court," Brown Jr. said.

The 1.98m (6ft6in) athletic marvel appears ideally suited for 3x3 having shown in his short NBA career a confidence for the long range shot and versatility as a hardnosed rangy defender.

"My athleticism can give me an advantage and I'm also good on defense," he said. "I'm sure there will be challenges but I'm ready."

While confident in his ability, Brown Jr. knows 3x3 represents a step into the unknown, where he will be pitted against seasoned players.

"The competition is going to be high. A lot of pros do it for a living so they have an advantage," he said.

Thus, Brown Jr. has leaned on his more experienced teammates, particularly Princeton star Kareem Maddox who is the USA's No.1 ranked player.

"We have chatted on the phone but we'll have a few days to prepare and develop chemistry during practice ahead of the tournament," he said.

Making things easier, however, Brown Jr. has played with Barry in the NBA G-League and the pair "know each other well" on the court.

Given his credentials in a still young career, there is a lot of hype over Brown Jr. who threatens to be a highlight reel in Miami.

However, he's not thinking of individual acts of brilliance but rather hoping his team replicate the "beautiful game" of 3x3 he witnessed during the USA women's glorious Olympic gold medal campaign.

"I watched the women's a lot and they played the right way...as a team" Brown Jr. said. "I just want to make sure we play the right way and get the Ws.

"I'm going to represent the name on my back and also the USA on the front as well as I can."