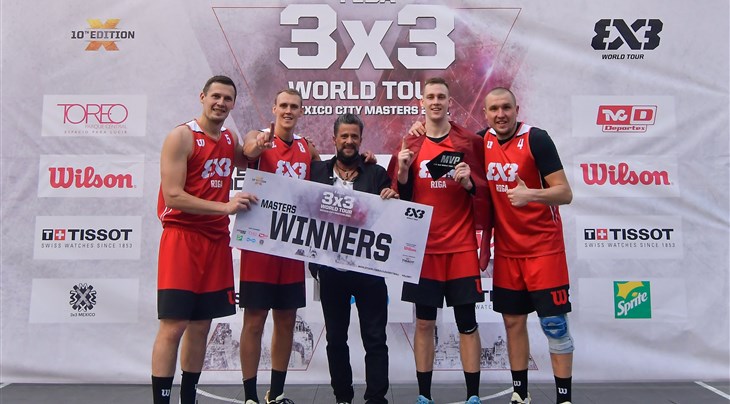 The four Tokyo 2020 Olympic gold medalists won the 8th Masters of their career after defeating San Juan PCI Group (PUR) in the final (21-15), well before the 10-minute limit in what was the 5th fastest game of the entire World Tour season.

The number two 3x3 player in the world Nauris Miezis scored his team's first 6 points and had a game-high 8 points in the final. He was the joint top scorer of the Masters, tied with his teammate Karlis Lasmanis, who ranked first in player value and was named MVP of the event.

For his return to the World Tour, Luis 'Pela Coco' Hernandez had a convincing showing in Mexico. The muscular San Juan star had a 6-point, 9-rebound double-five in the final and finished third overall in player value (after Lasmanis and Miezis) on the entire event.

Both teams had already qualified to the FIBA 3x3 World Tour Jeddah Final before the event. Gagarin (RUS) and Lausanne Sport (SUI) finished 3rd and 5th in Mexico respectively to stamp the last two tickets.

All the health and safety measures requested by local and national authorities and the Guidelines for the Return to Basketball, developed by the FIBA Medical Advisory Group (MAG), which were successfully introduced last season, were implemented once again.