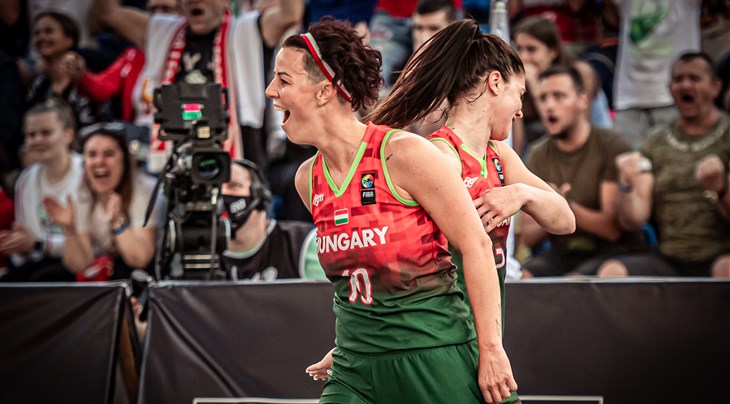 CONSTANTA (Romania) - The insane drama and non-stop 3x3 action continues at the FIBA 3x3 Europe Cup Qualifier 2021 in Romania on June 26 and 27.

There are four men's and four women's tickets available from each qualifying event in Israel and Romania for the prestigious FIBA 3x3 Europe Cup 2021.

France will host the seventh edition of the most important 3x3 competition for national teams in Europe with the iconic Eiffel Tower in Paris serving as the breathtaking backdrop.

Twelve men's and 12 women's teams will participate in the event on September 10-12, 2021. In the men's, host France, 2019 champs Serbia, Russia and Slovenia have qualified based on ranking. In the women's, host and 2019 champs France, Russia, Netherlands and Romania are automatically through.

In the qualifying tournaments, teams are divided into four pools. All teams play every other in their respective pools with the top two of every pool advancing to the knock-out round and the winners of the elimination games book their tickets to the city of love.

In Romania, the men's is headlined by No.1 seed Latvia, who recently in Graz secured a ticket to Tokyo through their star-studded lineup led by superheroes Karlis Lasmanis and Nauris Miezis.

But the first-choice Latvian team - who double as Riga in the World Tour - won't be in Romania meaning their depth will be tested in Pool A featuring Belarus and Slovakia.

Powerhouse Lithuania top Pool B and should be supremely confident of making Paris. They have World Tour stars Aurelijus Pukelis and Darius Tarvydas to vouch for their ambitious goals.

But their biggest threat could come against host and No.7 seed Romania.

The Netherlands are strong favorites in Pool C and hope to continue a 3x3 fairy tale in 2021. The Dutchmen painted Graz orange by booking a ticket to Tokyo and stars Dimeo van der Horst, Alvin Slagter and Aron Roije should be extremely confident of getting the job done in Romania.

Hungary loom as the team to beat in Pool D but one wonders if the heartbreak of missing out on an Olympic ticket at home will prove too much. You can bet that Tamas Ivosev will be on a mission and if he dominates the paint like he does for Novi Sad then it might be a wrap.

In the women's, host Romania have top billing and will be aiming to entertain their fans in style (since they already have their ticket to Paris based on ranking).

No.2 seed Hungary are the team to beat in Pool B but like their male counterparts one wonders how they will rebound after the bitter disappointment of missing out on an Olympic ticket on home soil.

They still have the brilliant Dora Medgyessy, who will have to shoulder the load without partner in crime Cyesha Goree.

No.3 seed Ukraine top Pool C, which features Latvia and Lithuania in what looms as a tight three-way battle.

Pool D might have the most interesting early matchup with No.4 seed Belarus playing No.5 and rising 3x3 nation Estonia, who impressed in Graz.

But Estonia have their own pocket rocket with teenager Anna Gret Asi having more in her bag than a kid going to school. She's the newest 3x3 sensation and her head to head battle with Sushchyk might just be the start of an epic rivalry.

You already knew it but the 3x3 action in Romania will be lit.