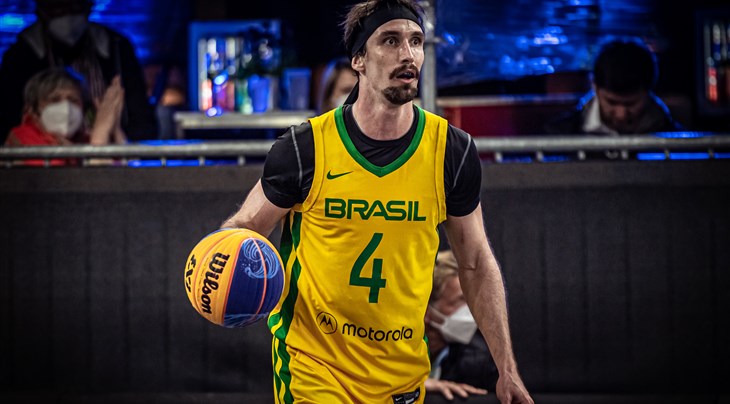 MIAMI (USA) - The top players in the Americas will be pitted in a battle of continental supremacy in the first-ever FIBA 3x3 AmeriCup in Miami on November 12-14.

We already looked at seven women to watch at the AmeriCup. Enjoy our Part 2, focusing on seven men you should keep an eye on next weekend.

Socas has been a leader for Brazilian 3x3 and provided tons of dynamite dimes over the years.

The former Real Madrid baller can do it all on the court. He can heat up from deep but get too close and he'll drive by and get to the rack in a flash. The 1.95m (6ft5in) player loves money time - it's when he's usually all cash.

And be warned. This dude is in-form having lit it up recently in Brazil. He's a born winner and he'll be doing everything he can for No.3 seed Brazil to rack up the Ws in Miami.

The 'Bearded King' is not just a fire nickname.

There might not be a more exciting player at the AmeriCup with Gill a dunking machine who puts sorry defenders in body bags.

No.2 seed Canada are highly rated and it's easy to see why with the 'Bearded King' looking to sit on the throne.

This Dominican dynamite could be one of the breakout stars in Miami if he can lead the fourth seed to a deep run.

Perhaps not as widely known globally, the 25-year-old gained experience - and plenty of success - locally before producing an eye-catching display at the FIBA 3x3 Olympic Qualifying Tournament in Graz.

The 1.94m (6ft4in) bucket getter poured in a team-leading 21 points from 4 games to inspire upsets wins over 4th seed Slovenia and Philippines.

He proved he can handle the big stage and now it's time to take his game to another level in Miami. There will be few more imposing players than this big fella who stands 2.06m (6ft9in).

But he's very much the modern player who loves throwing them up from deep - so don't be fooled by his great height because this dude has range.

No.9 seed Mexico will come into Miami as underdogs and face the biggest challenge of them all early against No.1 USA. But it will be a perfect showcase for the big Mexican to show the best in the business what he's got in his bag. This dude had maybe one of the most clutch performances in World Tour history this summer at the Lausanne Masters to lead 12th seed San Juan PCCI Group to the title.

It was one of the most surprising Masters wins we've seen for some time and it resoundingly put 3x3 pioneers Puerto Rico back on the map.

The 1.95m (6ft5in) dynamo was an absolute assassin in Lausanne - so good that there are whispers he might audition to be the next James Bond - where he hit an incredible three Tissot Buzzer Beaters.

But Matias lives for the international stage where he memorably helped Puerto Rico reach the quarter-finals at the FIBA 3x3 World Cup 2019. He was the team's second leading scorer but will be burdened even more in Miami with fellow star Gilberto Clavell missing.

Don't write off Puerto Rico, however, because Angel Matias is a 3x3 miracle worker.

There isn't really any need for an introduction here because Kareem Maddox has been one of the standout players on the pro circuit for some time.

The big fella is all cream around the rim with high-flying dunks and emphatic blocks galore. There might not be a more athletic player in 3x3. But he also has range and can hit from deep if left open - it's a scary proposition for opponents.

A former Masters MVP (in Los Angeles back in 2019), Maddox has been a reliable force for Princeton who have been arguably the leading US team on the World Tour for a while.

The 2.03m (6ft8in) athletic marvel absolutely loves representing the mighty red, white and blue and will be forever part of history - having helped USA win the FIBA 3x3 World Cup for the first time in 2019.

After missing out on the Olympics, Maddox will be extra determined to put the hoops power back in their usual position at the top of the tree,

Give a big welcome to Charlie Brown Jr! The 1.98m (6ft6in) gunner recently played in the NBA for Atlanta and Oklahoma City where he wasn't afraid to let it fly from deep.

The 24-year-old is crazy athletic - let's just pencil him in for our top 5 plays of the tournament! He's going to have to adjust to the fast and furious game of 3x3 but will benefit playing alongside experienced teammates Maddox and Canyon Barry.

We just can't wait to see his explosive talents in the 21-point game and get ready to jump on the bandwagon before it gets full.