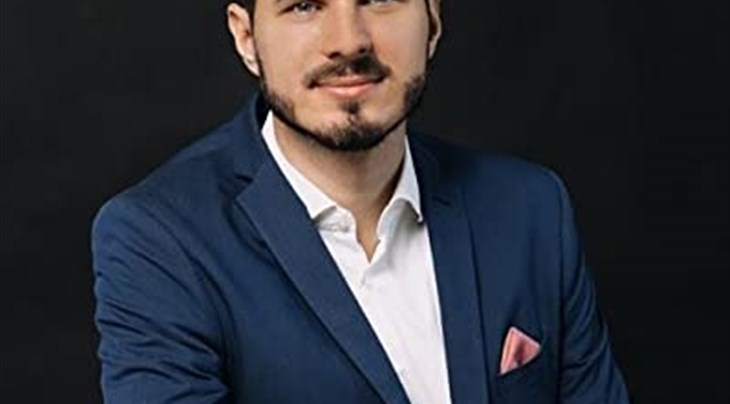 LJUBLJANA (Slovenia) - When we use the phrase "he wrote the book on ____", we’re often referring to an expert in their field. In this case, we’re being quite literal.

Luka Snoj, a former professional 3x3 player from Slovenia, began playing the format way back in 2011 and played as recently as early 2021. The two-time World Tour participant is also an accomplished writer, putting pen to paper on the first-ever book dedicated to 3x3.

He spoke with coaches, players, officials, and organizers to chronicle the rise of the game, first introduced in 2010, until today, just day away from the first-ever 3x3 event at the Olympic games.

We sat down with Luka to find out more about his 3x3 journey and the creation of this one-of-a-kind book.

I've been in 3x3 since 2011. That was the year I played my first 3x3 event. Then in 2012, I played at the World University Championships where I played for my country, Slovenia. This was my first big international event. Later in 2016 and 2017, as a 3x3 professional, I was the first European player to play in the first professional 3x3 basketball League in Japan. I love 3x3 and that was one of the reasons I wrote this book.

When did you first decide you wanted to write a book about 3x3?

The idea was born a long time ago. There wasn't a book about 3x3, and I wanted to learn about it, and I said, where can I learn? There weren’t any 3x3 coaches’ books to learn tactics. The idea (to write the book) came about 2 or 3 years ago. But honestly, this was a long process to create this book. I think it was like one year. I think I started writing the book around, I would say 13 months ago.

How many people would you say you interviewed for this project?

It’s hard to say but there were 10-15 people that were interviewed, including FIBA 3x3 officials and the best 3x3 players and coaches in the world. I even interviewed some 3x3 referees. I was also able to interview the head of global scouting at the Houston Rockets, Marko Radovanovic. There are a lot of people needed because there wasn't any book about 3x3 basketball and if you want to write about this basketball discipline, I had to learn from others. That's why it was such a long process.

Who did you write this book for? Who do you hope reads this book?

The book is 225 pages and there are numerous categories from history, why 3x3 was formed, to what are the most famous 3x3 professional basketball leagues to who is the leading all-time scorer in the World Tour or the World Cup, to advanced statistics, and so on. So, I can say it’s for coaches, players, fans, journalists. I think the main goal was to present the book to the readers who are new to 3x3 and are looking for a basic complete readout on the sport and other readers who are already familiar with 3x3 but are looking to get a better understanding.

While writing the book, what did you learn about why the game is so popular in such different and unique areas and its universality?

I say accessibility and the game being a lower cost. 3x3 definitely has a lower cost of organizing compared to traditional basketball, where you need to have a gym. If you want to play 3x3, you just get six guys on the playground outside, and then you can play 3x3. From the standpoint of a player, I would say that you have more freedom and responsibility. Since there is no in-game coaching allowed compared to traditional basketball, players need to take responsibility both on and off the court and they have to lead their team. When you play 3x3, it's all up to you and your teammates. So, maybe you feel that you're more important compared to basketball.

As the first European to play in a professional league, what do you think has changed the most from when you started playing to how 3x3 is now?

There are more professional leagues now, that's the first thing. Then, there is more money in 3x3, and more and more professional basketball players play 3x3. Ten years ago when people didn't know 3x3, they would say, “Oh, what is that? What is the sport actually?” They didn't even know that 3x3 existed. But now, they are aware of the discipline. I think with the Olympic games that are around the corner, more and more people will learn that this is a beautiful game and that 3x3 can be really fun and that's the most important thing for children and for recreational players.

I know that you wrote a lot about statistics, and obviously, you said you learned a lot of different stories. What do you think is the most interesting thing that you learned while you were writing the book statistically or in general?

I made an advanced statistical analysis. I compared the NBA team’s efficiency with the efficiency of 3x3 teams on the World Tour. What I found out is that 3x3 players tend to shoot more shots from behind the arc than basketball players. Also, when I compared the 2020 and the 2019 NBA seasons and the 3x3 World Tour from the same years, we can see the pattern that the average offensive rebound percentage is about 20% higher than the NBA. Why is that? Probably because there is only one basket and the smaller guys, like point guards don't need to defend the other basket. Here everyone presses on the offensive glass. Finally, for pace, we compared a 3x3 game to a 48-minute, NBA-style game. We found out that 3x3 plays at more than 1.5 times the pace of traditional basketball, so it's much faster. So, for every 100 NBA possessions per game, the World Tour would have approximately 160.

Are there any interesting personal stories or anecdotes that you've learned that stood out?

Well, there is an interview with Dusan Bulut and Danilo Lukic, the coach of Novi Sad and the Serbian National team that won several World Cups and several World Tours. Both of those interviews are in the book where they explain what 3x3 meant to them and how 3x3 has changed from the start to now. They explained why they were so successful, why they have been on the top for so many years, and what was their secret to success was.

Do you think you'll write another book in the future about 3x3?

So, when I started writing I wanted to cover as many basic elements as possible of 3x3, that was my first goal; just try to write the most important categories. Let's say those are history, tactics, and stats because some people would love to see who the all-time leading scoring in World Tour or World Cup history.

Since there are 225 pages, my idea was to just take the most general, the most basic things but at the same time, the most important categories and put them in one book. So right now, I would say that this book has its own fundamental value. From here, people can take this book in hand, learn some of the most basic fundamental stuff about 3x3, and this will help promote and help professionalize 3x3 so coaches can build on it.

When I first started writing this book, there wasn't a lot of public data for 3x3 and that was the hardest thing for me. I had to first do my own research. I had to conduct interviews. So, I hope this is a good start for others as well. Right now, I don't know, but I wouldn't say yes or no. I would not say I have another project in mind for now because this took such a long time. I just want to say that I'm really thankful to the people who helped me. I cannot name them all, but really without them, this book would not be what it is today. I hope that we can make this book international so we can spread it to parts of the world so people can see how beautiful this basketball really is. You can purchase "3x3 Basketball: Everything you need to know" online and in all good bookshops.