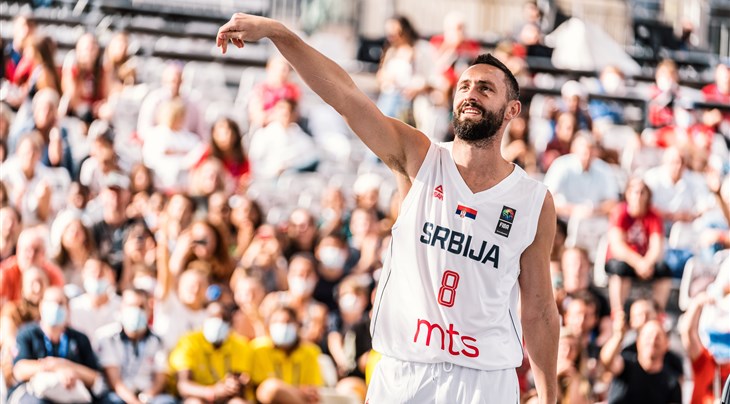 MIES (Switzerland) - It was a special year for 3x3, crowning the first-ever Olympic gold medalists and finishing off the 10th year of the World Tour. Here are five teams that made this year one to remember.

Serbia has been the 3x3 superpower since 2012 with 4 out of 6 World Cup and 6 out of 10 World Tour titles. In the first-ever 3x3 Olympic event, Serbia took home of the bronze medal, not the one they wanted. They would quickly get back to the top of the mountain at the Europe Cup 2021.

On the World Tour, it was once again a strong showing, as Ub was the best team for most of the year, winning back-to-back Masters titles at Debrecen and Montreal. Liman also finally broke through, winning the World Tour Final, their first success after years of shining in the regular season.

Following last year's World Tour victory, the Latvians continued their hot play on the World Tour 2021, and more importantly, at the Tokyo 2020 Olympics.

Karlis Lasmanis made the shot of his life, hitting a 2-pointer from the left wing to give Latvia the first-ever 3x3 Olympic gold medal. It was a moment that is cemented in 3x3 history and will forever live at the top of a long list of career accomplishments.

Back on the World Tour, Nauris Miezis and Lasmanis teamed up once again to help Riga secure the top regular-season seed and two Masters titles at Abu Dhabi and Mexico City.

Not since 2012 did San Juan win a World Tour event, but 2021 proved to be a year of old favorites and new surprises. The Puerto Ricans won the Lausanne Masters thanks to MVP Angel Matias and his three Tissot Buzzer Beaters. They also went on to finish as runners-up at the Mexico City Masters before finishing in the middle of the pack a the World Tour Final.

It was a season to remember for teams on the rise, including Antwerp and Amsterdam, part of this trio of teams we have our eyes on for 2022.

With all of the fire power at the Tokyo 2020 Olympics, it did come as a surprise to some that ROC ended up with the silver medal, losing to Latvia in the final game. But, it appears that Kirill Pisklov, Stanislav Sharov, Alexander Zuev, and the team are just getting started.

After earning the silver medal in Japan, Gagarin, as they are known on the World Tour, improved in every single event they entered, finishing 12th, 9th, 7th, 3rd and finally 2nd at the World Tour Final in Jeddah. Keep doubting them at your own peril, because these guys can ball.

Poland took down mighty Latvia to earn a spot at the Olympics, an accomplishment within itself, and battled as hard as they could when they got there. A medal wasn't meant to be, but the team played well throughout qualifying and in Japan. Their international run continued throughout 2021 with a bronze medal at the Europe Cup, adding to their stellar year.

It was also a good time for the kids, winners of the U23 Nations League. The future is bright for Poland and we hope to see them gain traction on the World Tour. It should also be an eventful future for 3x3 in the country as they'll be hosting the U23 World Cup in 2023.