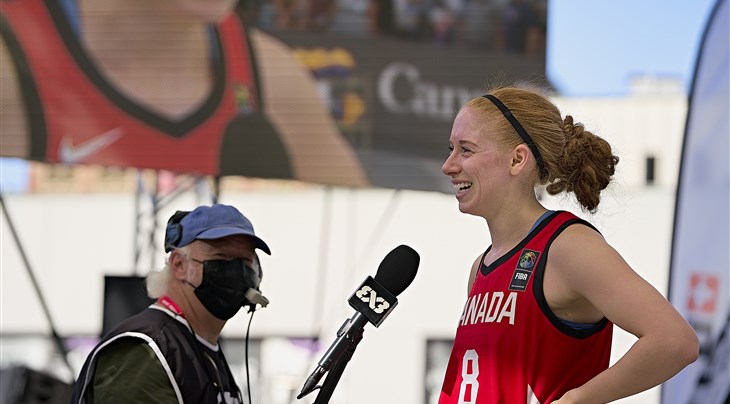 MIAMI (United States) - Canada has been a powerhouse on the FIBA 3x3 Women's Series since its induction in 2019. They finished second both in 2019 and 2021, carried by the stellar play of Katherine Plouffe and Michelle Plouffe.

Catherine Traer, now a regular for the Canadian team, was first introduced to the format after seeing a social media post by her former college (and future 3x3 teammate), Paige Crozon.

"I said, how can I get in on this? I would love to play this game, it looks so fun. I messaged Paige shortly after a tournament and said if you ever need a sub, I'm in, I want to play."

As misfortune would have it, Michelle Plouffe injured her hand and the team needed an extra player. She would join them in at the Poitiers Stop, finishing second at the event. She was hooked and won her final two events, including the Women's Series Edmonton Final Stop 2019.

"It was amazing to win the first Women's Series final (stop in Edmonton). Our team was so strong. I was the defensive stopper on that team and our chemistry was great throughout the tournament."

Fast forward to 2021, and Canada was back in the final and came up a bit short to Germany, one of the many improved teams at the top. Traer believes Canada can improve their preparation next year, but gives a lot of credit to the burgeoning talent across the board.

"I think it's great to see that the game is evolving and growing and it's good to see so many other teams doing well. You can tell that 3x3 is a growing discipline and has increased in popularity."

It's been a big year off the court as well, as she welcomed her son Isaiah in April of 2021. It's been difficult to come back to training, looking for gym time amongst the ever-shifting pandemic.

"I'm lucky to have a supportive husband who also plays basketball. I'm trying to get him to play 3x3 but right now he plays basketball for Canada. We worked together over the summer. I took my time, and went to my trainer back at home."

She and her husband are now in Spain, both playing basketball, taking on a new opportunity for them both. While she worked hard to return to the court to resume her basketball career, it was somewhat more challenging to get ready for 3x3 this fall.

"I have to admit, coming back to 3x3 was harder because it's played on a smaller court with less help. I think my first two tournaments back were rough, but I was patient and believed in the process of coming back to pre-pregnancy shape."

She now turns her attention to FIBA 3x3 AmeriCup 2021, the inaugural event being held in Miami, United States, and much closer to her native Canada.

"It will be fun to play closer to home. It's a huge event. We're really excited to play in it and it will be a great tournament and I'm looking forward to Miami."

Canada enter the event as the number one seed and a clear favorite to medal over the three-day event. No matter what seed they are, Traer isn't feeling the pressure.

"There's not that much pressure on us. I think based on what I've seen the USA has the biggest target on their back. They are the defending Olympic champions and any time the USA plays basketball they are the favorites... I think it will be a very competitive tournament overall and the objective is to come out as champions and we are hoping to achieve that."