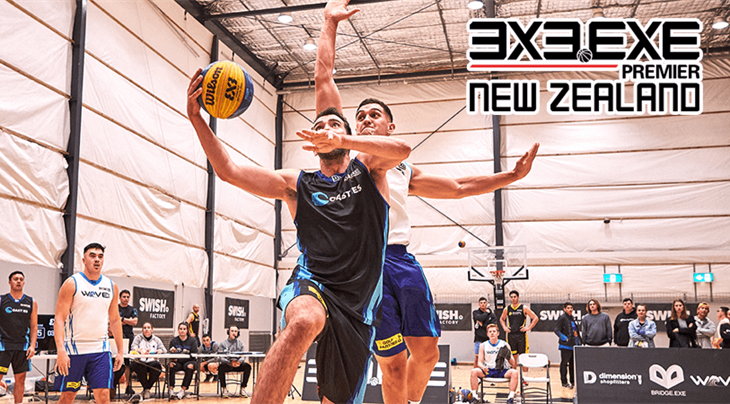 The 3×3.EXE Premier League will make its return later this month, this time with a major update to its competition structure – the inclusion of an all-new women’s conference for the first time in its history.

The 3×3.EXE Premier is a Japanese-run 3X3 league and is in fact the largest 3×3 league in the world, encompassing 5 countries, 16 Conferences and 96 teams. Established in Japan in 2014 with 7 teams, 3×3.EXE Premier has since grown to include Chinese Taipei, Thailand, Korea and New Zealand. The league tips off on 21 May and runs until September.

New Zealand has previously had two conferences of six teams each, a North Island Men’s Conference based in Auckland and a South Island Men’s Conference based in Christchurch, who battle it out for a spot in the Grand Final in September. The winner of the final then travels to Japan for the 3×3.EXE Premier Playoffs, facing off against the winning teams from other countries.

For the 2022 season, a Women’s conference based in Auckland has been included. BBNZ GM Events, David Huxford says that the addition of an all-women conference will be a welcome addition to the growing league.

“A women’s conference is the next evolution in the 3×3.EXE Premier league, and will provide plenty of excitement for 3×3 fans both here in Aotearoa and overseas,” says Huxford.

“With Covid impacting this league over the past two seasons [the league playoffs were postponed in 2021 and cancelled in 2020], we’re excited to get this new season underway – especially with the 3×3.EXE Premier scheduled to play across 14 venues and 13 cities across the country.”

“The continued growth of the 3×3.EXE Premier is testament to both the growth of the league here in New Zealand, and of 3×3 as a rapidly emerging sport internationally.”

Each of the teams will have a pool of 6 players, with only 4 selected by the team to play in the rounds. One of those players is Kaitlin Noyer, who will take to the court for a stacked Swish.EXE team in the Women’s Conference.

Noyer says she is looking forward to participating in the 3×3.EXE Premier League for the first time, joining her brother Karl who plays for the Swish.EXE men’s team.

“I’ve been watching Karl play in the 3×3.Exe for the past few years while I was in the States, it’s always been exciting to watch him but now it’s even more exciting to play in this league as well,” says Noyer.

“It’s exciting also to get that chance to go to Japan, it’s a place I’ve always wanted to go to –and Karl and his teammates have told me that it’s amazing to play over there. It’s going to be fantastic.”

Noyer says that Karl has provided her with plenty of ‘brotherly advice’ as she prepares for her first season in the 3×3.Exe Premier League.

“He’s already started ‘coaching’ me, as I play 3×3 with him too; we do play different positions but he’s been helpful and I’m sure he’ll be there to support me on the side lines.”

Susumu Ebihara, 3×3.EXE PREMIER Director says he is pleased to see 3×3.EXE Premier New Zealand open their 2022 season – especially after overcoming the challenges and limitations of the past season.

“Under the difficult situation with Covid-19 around, BBNZ have been very cooperative and so energetic at the same time, to make it happen for the coming season”, says Ebihara.

“We are confident that New Zealand is one of the hottest 3×3 markets with all their great EXE players with high potential, and worth paying attention to on the development of 3×3 after the Tokyo Olympics.”

The 3×3.EXE Premier League tips off from 21 May in New Zealand. Keep up to date with the League at nz.basketball/3×3/3×3-exe-premier.