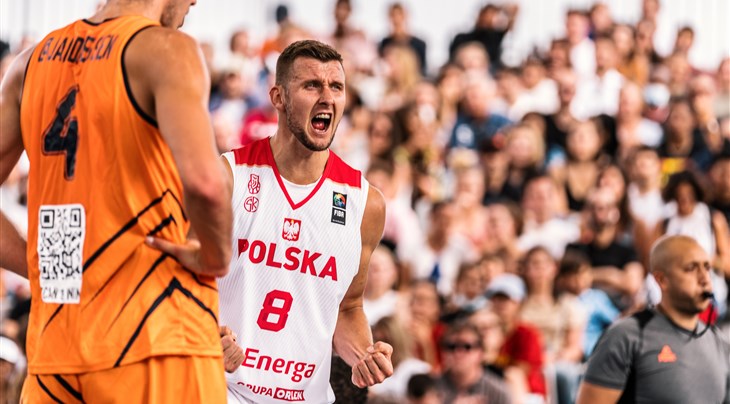 MIES (Switzerland) - There were jaw-dropping stat lines delivered by 3x3 players last year, reinforcing the eye test that the 21-point game has gone up several gears as anticipation builds for a new season.

We've combed through all the data - official men's and women's FIBA competitions - to find the most outstanding statistical performances and try to make sense what they mean in the bigger picture.

We well know that Canadian Steve Sir is all money from downtown. He's been splashing from deep for years and holds the all-time shoot-out record with 17 set at the Chengdu Masters 2019.

The 39-year-old had an emotional farewell to the FIBA World Tour last year, but still showed he hadn't lost his golden touch when he shot an incredible 7 of 7 against a stunned Saint Lucia to light up the inaugural FIBA 3x3 AmeriCup 2021.

Sir had more twos than February 22, 2022 and if you blinked, you missed the game lasting just four minutes. The sharpshooter demonstrates the importance of a sniper in 3x3 where, of course, a two-pointer is double than a shot inside the arc.

His 14 points on 7-7 shooting with 3 rebounds amounted to a total player value of 29.5, a season-high, well above Kidani Brutus' 22 at the Lausanne Masters against Novi Sad (12 points shooting 6-7 and 3 rebounds).

If a player starts heating up like a character in Space Jam then it's a wrap as sorry Saint Lucia found out in Miami. Thibaut Vervoort had insane stat lines in his rookie year

If there's one player tipped to make the leap into superstardom it just has to be Thibaut Vervoort, who was clearly the rookie of the year in 2021. At first, his nickname of 'Must See TV' seemed a little cheesy but it proved accurate and has stuck ever since to become one of 3x3's catchiest monikers.

Vervoort had an incredible 15 games over 10 points, including his season high of 14 in the quarter-final of the Lausanne Masters where he torched Aachen with 6 of 8 from deep. It's little wonder why he's Belgium’s baddest since Jean-Claude Van Damme.

This 3x3 natural lives for the big stage after taking the Tokyo Olympics by storm with multiple buzzer beaters and he scored 11 points each against eventual gold medalist Latvia and Poland, and 10 against China. The 24-year-old also filled the stats sheet with 7 points, 7 rebounds and 5 highlights against Netherlands.

If Vervoort can become ultra-consistent, he occasionally has quiet games, then expect him this season to be challenging the likes of Karlis Lasmanis for best player in 3x3 status.

Sandra Ygueravide is No.1 for good reason

Spanish sensation Sandra Ygueravide enters 2022 as the world's top ranked player - quite the accomplishment considering the stars dotting women's 3x3. The eye test tells you that the speedy 5ft. 8in. (1.72m) player is quicker than Nadal scrambling to the net and Ygueravide's insane handles enables her to get anywhere she wants.

The stats confirm all of that. She had many dazzling performances during her remarkable 2021, including three 10-point or more explosions during the FIBA 3x3 Olympic Qualifying Tournament. But she saved her best for late in the season during her MVP run at FIBA 3x3 Europe Cup 2021 in Paris, where the 37-year-old had an insane 8-4-8 to run rings around Lithuania.

Maybe her best performance of them all was in the semi-final when she led Spain's upset over powerhouse France with an equal season high 11-point barrage to stun the local fans.

Looking back at the player value, she had the best female performance of the season at the OQT against Chinese Taipei (4th overall combining men and women) with 11 points shooting 100% from outside the arc and the free throw line, with 5 rebounds and 2 highlights.

Triples doubles are a big deal in basketball, so to get even within a sniff in 3x3 is almost impossible, that's why we celebrate triple fives (or triple nickels). Still, some players really flirted with triple doubles this year.

The best of the lot was, you guessed it, Karlis Lasmanis who put on his cape to compile an insane 11-9-5 against Jeddah during his MVP run at the Abu Dhabi Masters. He wasn't alone in being close to a triple double with Nic Celis - proving a more than worthy sidekick to Vervoort - producing a 14-10-4 against Ub at the Poitiers Challenger.

Riga's Nauris Miezis showed off his all-round skill against Graz at the Debrecen Masters with a dizzying 13-6-6 to underline his superhero credentials.

Several women also came close to the mark with superstar Sonia Ursu filling up the stats sheet with 10-7-6 against Hungary at the FIBA 3x3 Women’s Series 2021 Mies Stop, while WNBA star Allisha Gray - who surely would crack the hallowed triple double feat with more games under her belt - had 8-9-6 for USA against ROC in the Olympics.

It seems an impossible task but don't be surprised if a 3x3 star creates history in 2022.

Best performances in a final

Przemyslaw Zamojski was the Pole who stole the show at the FIBA 3x3 Europe Cup 2021 with a mesmerizing 11-5-8 against Russia in the bronze medal game (including an amazing game-winner).

It was a jaw-dropping performance that set the standard but there were plenty of other notable feats in big games, including Stahinja Stojacic's 12-point explosion for Ub against Amsterdam at the Montreal Masters and Stefan Kojic's 11-point masterpiece to lead Liman to glory at the Jeddah Final.

It might not have been statistically among his greatest games, but Lasmanis just has to be on this list after his unforgettable heroics in the gold medal match at the Tokyo Olympics against ROC, where he scored a game-high 10 points.

The 27-year-old nailed a two-piece for the ages to deliver Latvia a historic gold medal and ensure Lasmanis is part of Olympics folklore forever.