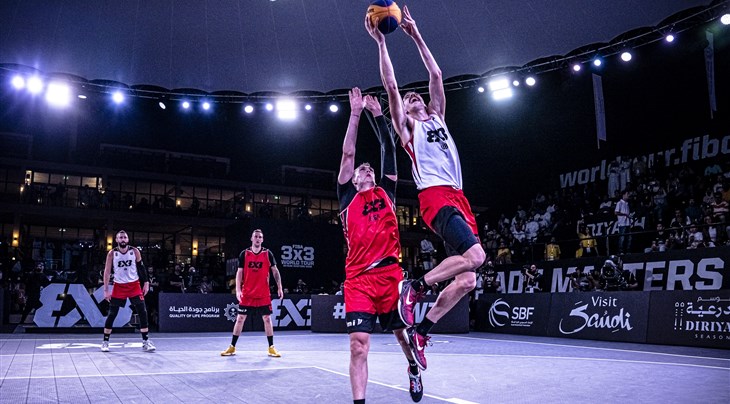 ABU DHABI (UAE) - After watching an instant classic of a final at the FIBA 3x3 Riyadh Masters 2022 between rivals Riga (LAT) and Ub Huishan NE (SRB), it's easy to come away thinking they are a class above the rest ahead of the looming Abu Dhabi Final.

Right now, Riga and Ub deserve favoritism heading into the showpiece event having each dominated parts of the regular season.

They both have the highest winning percentage on the World Tour at over 80%, while their stars are unsurprisingly at the top of the stats charts.

Riga were slow to start the season but Nauris Miezis has been great throughout and is ranked No.5 in player value, while Karlis Lasmanis has somehow become even harder to stop and he has a leading 8.5 points per game for those who have played more than 10 games.

All four of Ub's players are in the top eight in player value led by leader Strahinja Stojacic and their stability has been evident by them playing in all 33 games. It's little wonder their chemistry has been off the charts.

The Serbs took 3x3 to a new level when they won the first four Masters of 2022 to be the best team we've seen on the pro circuit since Novi Sad's famous unbeaten run in 2018.

But Riga have matched that level with an insane 25-0 run since the return of Karlis Lasmanis, including a trio of Masters titles.

These four Olympic gold medalists have never looked better, especially Lasmanis and Miezis who have unleashed their superpowers with daggers, non stop highlights and crazy bucket getting.

It all led to the final in Riyadh which had more anticipation than the release of Black Panther; Wakander Forever. And it lived up to the hype between two evenly-matched teams with their deadly duos going toe-to-toe.

Miezis, who has been more clutch than a stick shift car, was the difference with a game-high 10 points and the Maurice Lacroix buzzer beater from way downtown that will be remembered forever.

That unforgettable game has fans desperate for a re-match at the Abu Dhabi Final but it's not going to be so simple. There are a slew of other great teams on the circuit starting with Liman Huishan NE (SRB) who are probably rightly angry it's taken us so long to mention these 3x3 greats.

Liman might have only won one Masters title this season but they've dominated the Challengers to ensure they've maintained their high standards set after so many years of being among the top tier.

Antwerp (BEL) and Vienna (AUT) are also Masters champs this season, so they know that winning feeling and boast Thibaut Vervoort and Stefan Stojacic respectively - dudes who can legit be the best player on the half-court at any moment.

To be honest, this World Tour is so deep that any of the 12 teams in Abu Dhabi can get hot for two days en route to celebrating the biggest prize in 3x3.

But, right now, Ub and Riga deserve to enter as favorites.