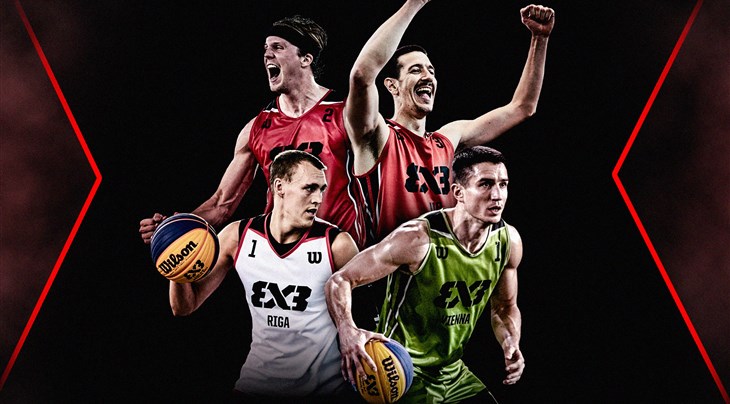 MIES (Switzerland) - The stars shone during the FIBA 3x3 World Tour 2022 with the talent incredibly deep.

But, of course, only four players can squeeze into the team of the season which is almost an impossible task. Fortunately, we have data to back up the selections, which are based on player value per game.

And to qualify for the criteria, a minimum of 22 games had to be played - or half of the season -

'Robin' was often the main superhero for Riga and he had a lot of burden on his shoulders when Lasmanis missed the first half of the season.

But when Flight KLM returned to the half-court, Miezis had more support and became even deadlier with defenses having to focus on two caped crusaders.

The 31-year-old had never looked better as he hit dagger after dagger to help Riga win 27 games straight as he collected MVPs in Cebu and Riyadh.

So it really wasn't surprising that Miezis finished with the highest player value per game for those meeting the criteria of games played. And, deservedly after so many highlights in 2022, he's won a spot in the team of the season.

'Must See TV' lived up to his nickname with Vervoort elevating into one of the absolute top stars of 3x3 after being the rookie of the season in 2021.

The 24-year-old won silverware with an MVP after leading Antwerp to a breakthrough victory at the Debrecen Masters. Vervoort's a walking bucket who had the most number of Maurice Lacroix buzzer beaters (4) on the World Tour, but he's also nasty at the rim and finished with 11 dunks.

He's also an animal on D with Vervoort having a World Tour 2022 leading 16 blocks - one every second game - to prove his all-round game.

Scarily for opponents, Vervoort is only just entering his peak so expect season three to once again be prime-time viewing.

It is fitting Stojacic is in this team because his incredible comeback was one of the best stories of 2022.

Overcoming his serious knee injury - which almost forced him into retirement - with determination, Stojacic reminded everyone why he may be 3x3's best ever bucket getter.

He quickly started dominating the court just like his legendary years with Liman as he powered Vienna into becoming a serious contender. The stats don't lie - this dude was unguardable with Stojacic averaging an insane 7.8 ppg on the World Tour.

'Mr Robot' was at his absolute best during a 50-point scoring binge to lead Vienna to victory in Paris in their first triumph on the World Tour and he was almost as good at the Abu Dhabi Final as the Austrians fell just short of the biggest title on the pro circuit.

Stojacic really is a robot because we're not sure if anyone else could have successfully returned from so much adversity.

But we're so glad he's once again among 3x3's best.

No team of the season is complete without the No.1 3x3 player. Stojacic was the best player on the best team with Ub winning five titles on the World Tour 2022, including the showpiece Abu Dhabi Final.

'Doctor Strange's' durability and consistency was unwavering all season as Stojacic walked away with three Masters MVPs.

He led most stats categories, including being well on top of highlights (188) and drives (92) to underline that he might just be the most entertaining player alive.

Stojacic deservedly won the regular season MVP to add to his bulging trophy cabinet. The lanky 6ft. 6in (1.98m) Serb just keeps getting better every season culminating with inspiring Ub to become the undisputed powerhouse in 3x3.

Right now, Strahinja Stojacic wears the crown and just has to be on the best team of 2022.