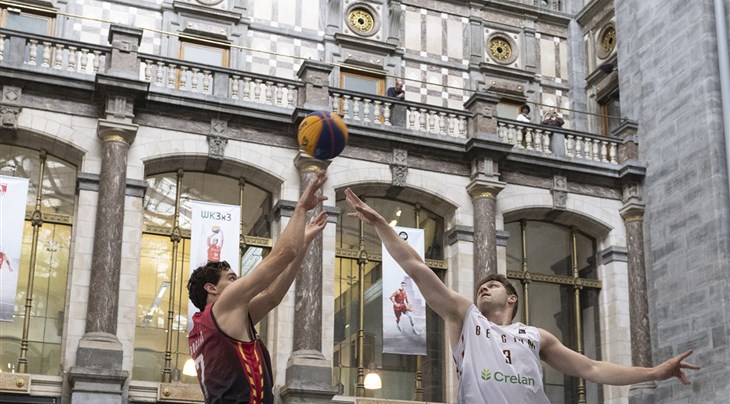 ANTWERP (Belgium) - The Belgian pre-selections – eleven names in total – for the Crelan FIBA 3x3 World Cup have been unveiled at a press conference at the Central Station in Antwerp. The World Cup will take place at Groenplaats in Antwerp from 21st until 26th June. The six-day event will also see other fun side events organized in different locations in the city.

Ine Joris, Julie Vanloo, Laure Resimont, Becky Massey, and Elise Ramette are the five players pre-selected for the 3x3 Cats. Six players have been pre-selected for the 3x3 Lions: Thibaut Vervoort, Rafael Bogaerts, Nick Celis, Bryan de Valck, Caspar Augustijnen and Maxime Depuydt. On Monday 20th June, one day before the start of the Crelan FIBA 3x3 World Cup, the names of the four Cats and Lions who will also perform at the tournament will be announced.

Both in the men’s and women’s competitions there will be 20 countries competing for the world title. These countries are divided into four pools of five. Each team plays against the other four teams in their pool. The best team from each pool will qualify automatically for the quarter finals. After the quarter finals, there is a knock-out stage leading up to the final. The second and third teams in each pool will first have to play in the final 16. The tournament ends after the pool stages for the teams finishing fourth and fifth.

Antwerp’s mayor Bart De Wever is looking forward to an international battle. “When the people of Antwerp were introduced to basketball for the first time around 1930, their jaws dropped for ‘the most tiring sport of all’. In the meantime, our city has developed a rich tradition of street basketball”, says De Wever. “Young people meet each other in the neighbourhood squares, and the whole vibe surrounding it has been bringing communities together until now. That is why we are proud that the 3x3 World Cup is taking place in Antwerp. And we continue to commit to supporting these and other urban sports to put Antwerp as sports capital of Flanders on the map even more.”

Stands for 1,700 spectators at Groenplaats

All Crelan FIBA 3x3 World Cup matches will be played at Groenplaats, where stands for 1,700 spectators will be erected. The event is free, but if you want to secure your seats, you can reserve tickets for a session for 7 Euros on the official website, this includes two drinks vouchers that you can exchange for a drink in the public plaza next to the main court at Groenplaats. There are still tickets available for all group matches of the 3x3 Cats and 3x3 Lions from Tuesday until Saturday. Tickets for Sunday are not available anymore.

There will be a warm-up court on the Grote Markt with stands for 200 spectators. But there won’t only be basketball on Groenplaats and the Grote Markt. The old-school basketball in squares will be revived during the Crelan FIBA 3x3 World Cup at Sint-Jansvliet and Sint-Andriesplaats with a neighbourhood tournament (Wednesday), basketball camps in cooperation with Elite Athletes (Thursday and Friday), a corporate tournament (Friday), the Crelan 3x3 Masters tournament (Saturday and Sunday) and free 3x3 initiation open to everyone (Tuesday, Thursday, Saturday and Sunday, between 4 and 5pm every day).

The spectators in the stands of the main court can also enjoy daily spectacular shows and demonstrations of freestyle basketball and other urban sports: BMX, breaking, rope skipping, panna, … The Mini Droids, winners of Belgium’s Got Talent 2021, will also be there. Additionally, beatboxers and hip hoppers will be providing plenty of entertainment. Furthermore, there will be workshops teaching the Crelan FIBA 3x3 World Cup visitors all these urban skills and allowing them to show off their street credibility in the Grote Markt every day.

Flanders on the Map

Flemish Minister for Sport Ben Weyts is delighted to welcome the Crelan FIBA 3X3 World Cup in Antwerp. “Flanders is on the hunt for top events with an international flair. 3x3 basketball fascinates young people, some of whom would otherwise not get into sport, thanks to its speed, spectacle, and dynamic play, which stimulates and inspires them”, says Weyts.

“Our Flemish cities are creative hotspots where young people can also express themselves”, adds Flemish Minister for Tourism Zuhal Demir. “The 3x3 basketball World Cup gives us the perfect springboard for showcasing the many assets our cities have to offer to the youth of the world, and convincing them to visit Antwerp and our other fabulous cities. In the runup to the Championships, we will be showing off all that Flanders has to offer to the world as ‘must visit’ destination.”