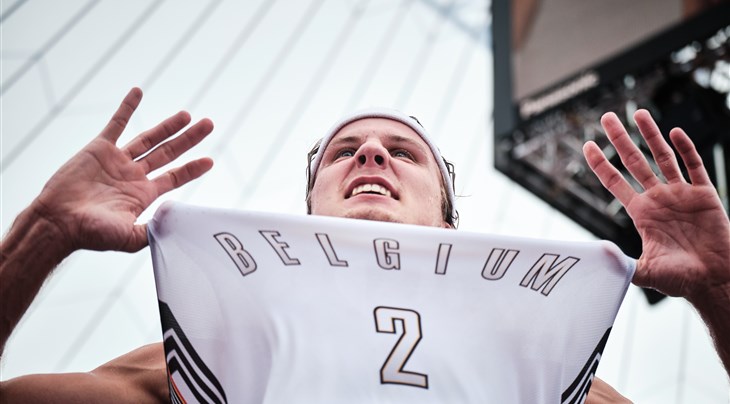 For the marquee 3x3 event this year, held in Antwerp on June 21-26, there are four pools of five teams for both men's and women's categories in the first 3x3 World Cup since 2019.

As per FIBA regulations, the teams were allocated via the 3x3 Federation Rankings at the cut-off date of November 1, 2021 in this case. In the men's, No.5 seed USA's quest for consecutive titles starts with a mouth-watering contest against No.4 Belgium who are a rising 3x3 country and will be boosted by the support of the local fans.

Belgium memorably beat the hoops power at the FIBA 3x3 Olympic Qualifying Tournament as the USA surprisingly fell short of a ticket to Tokyo. Pool D also features rising 3x3 power Austria, Egypt and a team to be determined*.

No.1 seed Serbia will be seeking a record fifth title and top an extremely loaded Pool A which also features former silver medalist France, Puerto Rico, Brazil and New Zealand who qualified memorably after edging Iran in a thrilling final at the FIBA 3x3 World Cup Qualifier Asia 2022.

No.2 seed Lithuania loom as the team to beat in Pool B and will be pitted against Germany, Mongolia, Chinese Taipei and Chile.

In what might be the 'Group of Death', Pool C is set to be crazier than Oscars night. No.3 seed and Olympic gold medalist Latvia will be favorite but face two-time World Cup silver medalists Netherlands, World Cup 2019 bronze medalist Poland, Japan and China - all of whom competed at the Tokyo Olympics.

That's right: of the 8 men's teams that played at the 2020 Games, 5 of them will start from the same pool. This means that 2 of the teams which played in Tokyo will be eliminated in the pool stage. Remember that 2022 will mark the first edition of the 3x3 World Cup, where the only pool winners qualify directly to the quarter-finals while the teams ranked second and third move on to a play-in eighth-final. A relief for the fans in this case as previously, only the top 2 teams in each pool qualified to the quarter-finals.

In the women's, No.2 seed France and two-time World Cup winners USA will be must watch in a super-competitive Pool B, which also features Austria, Brazil and New Zealand who dominated the FIBA 3x3 World Cup Qualifier Asia 2022.

No.1 seed Germany top Pool A which will be filled with contenders. No.9 seed Romania, No.10 Lithuania, Olympians Japan and last but not least, defending champion and Olympic bronze medalist China comprise this absolutely loaded group.

Pool C is topped by No.3 seed Poland who will battle Olympians Mongolia, Egypt, Dominican Republic and host Belgium.

To cap things off, FIBA 3x3 Europe Cup 2021 champs Spain will be hoping their sizzling form carries over into this year as the No.4 seed top Pool D. In what shapes as another loaded group, No.5 seed Netherlands, powerhouse Canada and Chile will also be eyeing progressing further while a team to be determined* will be added to the mix.

Buckle up because the full schedule will be announced soon.