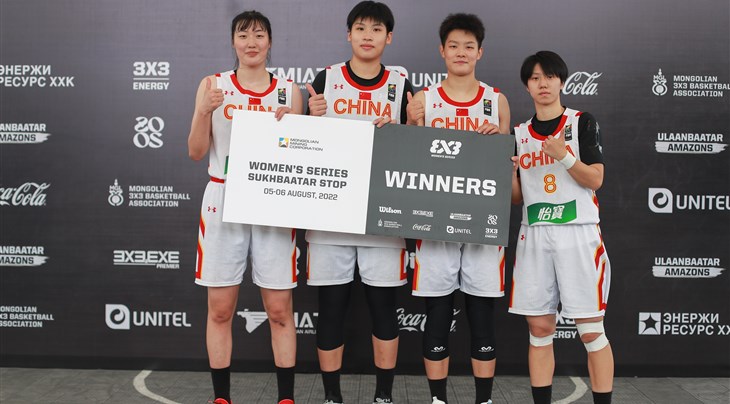 China had not won on the Women's Series since the Lignano Stop in Italy on July 13-14, 2019. Now the wait is over and, interestingly, the victory came without any of the players who struck bronze at the Crelan FIBA 3x3 World Cup 2022 and just one (Kun Huang) who won the Asia Cup earlier this season.

Instead, the team relied on the four players who dominated the Asia Conference and stamped their ticket to the Nations League Final (a competition reserved to players under the age of 23), which will take place in Constanta, Romania on September 14-16.

The Asia Conference top scorer once again won the scoring charts in Sukhbaatar. The towering 6ft. 3in. (1.90m) Mingling Chen was named MVP after also leading all players in player value and finishing second in rebounds.

Chen had 6 points and 9 rebounds in the final against number one seed Germany (18-11) and got a little help from teammate Xinyu Luo . The 20-year-old had one of the only 2 triple-fives of the entire event in the title game (8 points, 5 rebounds and 5 highlights). Luo put on a show in Mongolia: she topped all players in key assists.

Laura Zopler scored 5 points for Germany in the losing effort. This said, the Women's Series reigning champs can take solace in the fact they're re-gaining the lead in the season standings, ahead of France. Also, the team had ice in their veins both days, winning two games at the buzzer, including the semi-finals in overtime against Poland, courtesy of an Emma Eichmeyer runner.