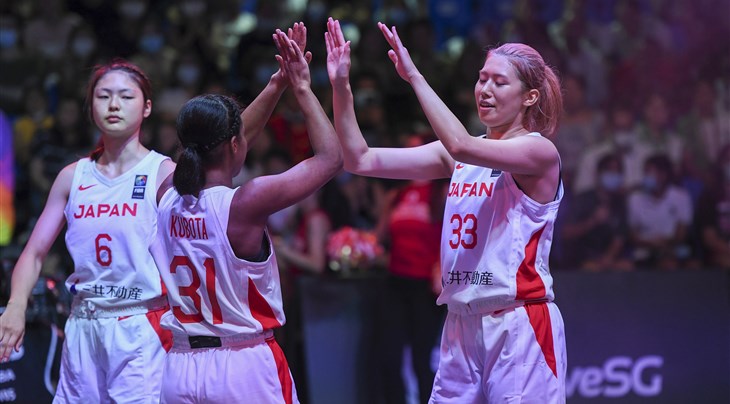 Australia lived up to the hype and easily progressed to the quarter-finals along with New Zealand, Chinese Taipei and Japan.

In the women's, Japan progressed to the knockout stage and so too Chinese Taipei, Indonesia and Sri Lanka.

It's a return of the Asia Cup after a three-year absence and played at the footsteps of the spectacular Marina Bay Sands.

Every time Australia and New Zealand meet in sports, there are fireworks. And this was no exception as the Trans-Tasman rivalry heated up Singapore.

After the teams traded buckets, Australia took control through Jesse Wagstaff who was in a hurry to finish it before the time limit as he became a one-man scoring machine.

The tall and athletic Australia were just getting warmed up as they put the foot down against Qatar to stay on course for a three-peat.

Everything went perfectly for the Aussies except the coin toss!

When the coin toss doesn't go as planned 😅 #3x3Asia pic.twitter.com/j0EAaP1xyf

Japan women's team were able to somewhat limit red hot Kimberley Pierre-Louis as they survived a major scare from Indonesia before shutting down Singapore with a defensive masterclass to silence the passionate home fans.

You want a new 3x3 star? Stand up Jesse Wagstaff, who impressed during his 3x3 debut at the FIBA 3x3 Manila Masters and took his game to new a level in his international showcasing.

The 6ft. 8in (2.03m) bucket-getter took matters into his own hands against rival New Zealand as he was unconscious mixing twos with aggressive drives to the rim. He finished with 14 points to match New Zealand's tally all by himself! Wagstaff's incredible haul was remarkably overtaken by a superhuman performance from Kimberley Pierre-Louis, who scored an insane 16 points to lift Indonesia's women past inspired host Singapore and into the quarter-finals.

The athletic 6ft. (1.83m) player feasted in the paint and played bully ball against the smaller Singaporeans to finish with 16 points and 9 rebounds to outscore to host on her own.

There's good reason why her nickname is 'Buckets'.

Turkmenistan were spectacular in qualification but struggled first up against Chinese Taipei.

So it was do or die against Sri Lanka and favorite Turkmenistan appeared to be finding their best but couldn't pull ahead.

Sri Lanka kept fighting as scores were deadlocked in the final minute. They found inspiration through Anjalee Ekanayake, who produced a tough layup as Sri Lanka held on and celebrated memorably.

The Asia Cup continues on Day 4 with men's and women's Pool A and C play.