Development of 3x3 in Africa continues in Benin 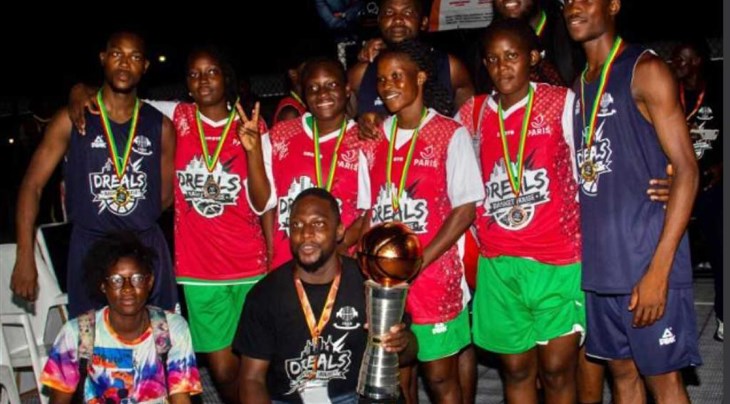 For Jean-Marc Aloumon and his Dreals Paris project, the event in Cotonou is another success story that has further opened opportunities for players and many others involved in the game.

"PEOPLE WERE REALLY OPEN-MINDED, WE CAN FEEL THAT THEY REALLY WANT TO LEARN FROM THE EXPERTS AND THE RESULTS WERE MORE THAN WHAT WE EXPECTED."- Aloumon

He told FIBA.basketball at the end of the event that: "It was a great event, great experience with children, participants and all who were involved in the organization. People were really open-minded, we can feel that they really want to learn from the experts and the results were more than what we expected."

"In Benin, the federation quickly understood that 3x3 can be a good option to measure up among top basketball nations in Africa. The Olympic National Committee, the ministry of sport also accepted the idea and supported the federation to organize and developing many activities in 3x3 around the country. Our DBH concept was well-received by the public and all players."

He notes that the event is a good opportunity for the country to make easy call-up into 3x3 camps for national selections, and clinics for 3x3 referees, coaches and private promoters with the goal of giving them all tools to continue the development of 3x3 all around the country.

In the opinion of Aloumon, the people of Benin learned a lot during the Open House Cotonou. He says that since their departure, 3x3 activities are on the rise in schools, basketball clubs and the country at large from reports that have reached him. "We are getting many photos and videos from those coaches who participated in our clinic," he revealed.

On the goals of Dreals Paris for the 2022, Aloumon says: "We are doing it step by step to reach our goal. All the countries we have been to are getting lots of points in the FIBA 3x3 Federation ranking. Benin is now at the 85th position in the world ranking and is 13th in the African ranking."

Aloumon insists that his organization is not resting on its laurels and is still developing different strategies to push as far as possible any federation to reach the world stage of 3x3.

"Besides making clinics, preparing national teams by bringing experts like Angelo Tsagarakis, Richard Billant and Karim Osman, we are also trying to build strong teams that can participate in the World Tour and try to organize big events like quests in Africa. With this package, we are sure that we can bring some African nations to the Paris 2024 Olympics.

Aloumon admits that the biggest challenge is to find sponsors or partners. He points out that with more investment, Dreals can quickly reach their goal by organizing more tournaments in more countries and also some World Tour events.

"We are calling on all sponsors, partners who want to help us bring African teams on the world stage. The talents are there, the experience is there too but now we need more investment. 3x3 can really help improve basketball players in skills, velocity, concentration, shooting and confidence. In 3x3, all players are playing offense and defense for 10 minutes. No time to rest, no time to lose our attention, So it's a perfect way to improve the basketball game on the continent."

The former international now based in France wants to dream big and aims to go around the African continent. "We want to finish our quest in the continent, by making a tour which already began in Cotonou, then to Ouagadougou, Accra and finish in Abidjan. We're still open to adding more stops like Kinshasa or others towns, depending on the federations that are willing. The grand finale will be in Paris in September."