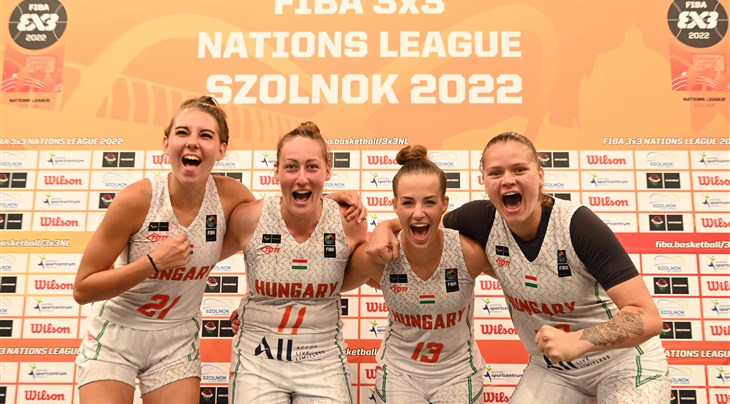 SZOLNOK (Hungary) - A rampant Hungary (women's) and Israel U21 (men's) emerged victorious in the FIBA 3x3 Nations League 2022 Europe Central Conference on August 2-4 to book tickets to the Nations League Final in Constanta, Romania, on September 14-16.

Host Hungary absolutely dominated the women's draw as they continued their flawless run which began in Stops 1-3 in Bratislava, Slovakia, on July 1-3.

They won an insane 16 straight games throughout the event to finish with a perfect 600 points and a massive 140 points ahead of second-placed Czech Republic.

21-year-old 3x3 star Orsolya Toth led all scorers in the conference and showed she has a Louis V bag of tricks:

In the men's, Israel U21 looked in trouble against fierce competition from Slovenia and Czech Republic (starring conference top scorer, sharpshooter Filip Novotny) but played superbly in Szolnok to come from behind and book a spot to the Final.

After winning the all-important Stop 5, it came down to the finale and Israel did enough even they lost to the Czech Republic in a thrilling decider.

Israel U21 finished just 20 points ahead of Slovenia and Czech Republic, in great part to the one-two punch of sniper Yonatan Levy and Gill Noyovitch.

The Nations League makes a quick return on August 12-18 with the Africa North Conference in Cairo, Egypt.