Everything we learned from FIBA 3x3 World Tour Paris Masters 2022 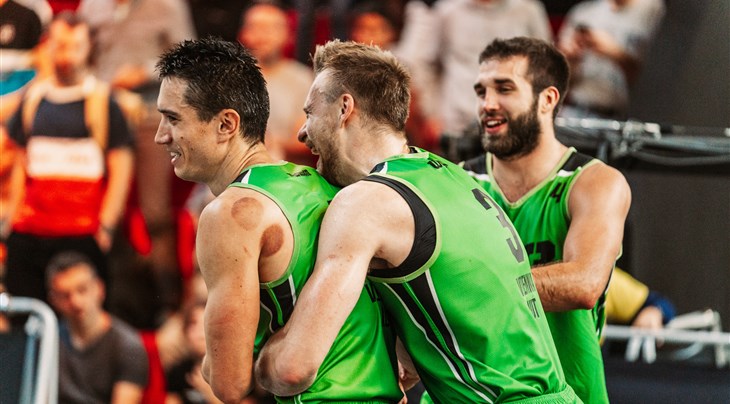 PARIS (France) - The FIBA 3x3 World Tour's first visit to France did not disappoint with rising Vienna (AUT) claiming a historic triumph at the Paris Masters on October 7-8.

Let's look back at an incredible two days of action.

The Austrians have been rising the past couple of years but we knew they were deadly serious about 3x3 when they hired former number one player of the world Stefan Stojacic as player-coach. It was unknown whether one of 3x3's best ever would get over a serious knee injury but his hiring has been a masterstroke.

Stojacic is back better than ever and he's inspired his teammates with Vienna having moved up the 3x3 ladder with a first ever title on the pro circuit (at the ABA Edmonton Challenger) and enjoying consistent finishes on the World Tour.

But to really be amongst the best they needed a breakthrough Masters victory. And they did it in style by getting through the two top ranked teams and several other emerging teams in a golden run in Paris.

They silenced the home crowd with victory over Paris (FRA) on Day One before the fun really began starting with a famous 21-12 beat down of No.1 Ub (SRB). Stojacic outplayed his brother Strahinja, who is the top ranked player in the world, while Vienna's swarming defense limited the normally hot-shooting Ub to a miserable 1 of 14 from 2.

Another major challenge was ahead in the semis against No.2 Liman (SRB), who proved a tougher opponent and were aiming for back-to-back titles after winning in Utrecht. But a pumped-up Stojacic was on fire against his former team with 13 points to lift Vienna into their first final on the World Tour.

Their momentum couldn't be stopped as they easily beat new kids on the block Utrecht (NED) to trigger memorable celebrations. Stojacic was obviously the standout but he had plenty of support through Matthias Linortner while Quincy Diggs stepped up big time in the final.

Vienna's victory was even more impressive being without high-flyer Filip Kramer meaning they can get even better, which should frighten opponents.

Not even Fergie has had a better comeback than 'Mr Robot', who is rewired and maybe playing better than when he was arguably the best player alive during his dominant days with Liman.

Stojacic scored a ridiculous 50 points in 5 games to win the MVP and he became the first player to hit the magical 50-point barrier points on the World Tour in 6 years. He was also second in player value (43.5) and highlights (16) to underline that he's once again one of the best in the business.

Most significantly, he was the best player on the half-court during star-studded games against Ub and Liman meaning that he's right back in the conversation for who wears the 3x3 crown.

Quite fittingly, Stojacic hit the title-winning shot to deliver glory for Vienna and you feel it won't be the last time he's celebrating a title in 2022.

Utrecht are the real deal

Newcomers Utrecht lit up their home Masters but there was an unknown over how they would fare on the road without the support of their loud fans.

There was no need to worry because these Dutch high-flyers are the real deal after a runner-up finish, which included a thrilling Day One victory over Ub and knockout wins over Paris and NY Harlem (USA).

Superstar Worthy de Jong once again proved he's most certainly worth watching after another spectacular tournament. Dude should have his own Top 10 highlight reel and inspired a new trendy 3x3 motto: "Live Fast, De Jong"

The human showtime didn't do it alone and he received plenty of support from Hieronymus van der List in what is becoming a dangerous duo.

After winning four straight Masters to start the season, it seemed reasonable to think Ub could do the impossible and chase Novi Sad's record of 32 straight wins in 2018.

But the depth of talent is much deeper these days on the World Tour and perhaps it was always unrealistic to think Ub's unbeatable ways could continue. After falling short in Debrecen, Ub had a breather from the World Tour and were hoping to return to their winning ways in their return.

But the standard just keeps rising with Ub only squeezing by Danube (SRB) first up before losses to Utrecht and Vienna saw them crash out in the quarters in their earliest exit of the season.

Maybe it just wasn't meant to be for them in Paris with Strahinja Stojacic and Dejan Majstorovic off target, but we know they will return with a vengeance next time they're on the half-court.

Paris is a lit venue

In one of the most famous and beautiful cities in the world, 3x3 was naturally a perfect fit in Paris. The first-ever World Tour event in Paris was played at the Carreau du Temple, in the 3rd arrondissement and it was an amazing experience for everyone.

The energy and atmosphere was off the charts and this was just a taste of things to come in Paris where of course 3x3 will be making its Olympic return at the 2024 Games.