Everything you need to know before FIBA 3x3 Europe Cup 2022 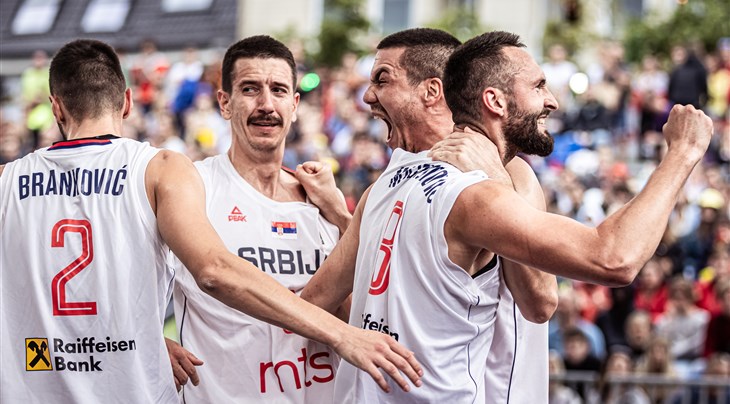 GRAZ (Austria) - Continental bragging rights are on the line as some of the world's best players prepare for the FIBA 3x3 Europe Cup 2022 in Graz, Austria on September 9-11.

The three-day spectacle always delivers and let's get you hyped by looking at the main details of Europe's showpiece event's seventh edition, which will take place in a jaw-breaking UNESCO World Heritage venue, Kasematten Schlossberg.

Where can I watch?

The action runs from September 9-11, and you can follow it live on TV and on social on the FIBA 3x3 YouTube, Facebook, Sina Weibo and Douyin pages.

The 24 teams qualified thanks to being host (Austria), defending champions (Spain's women and Serbia's men), the position of the national federation in the 3x3 Federation Ranking or through the qualifiers.

Expect anyone else to start this list? Of course, we just have to start in the men's draw with mighty Serbia who are looking for an absolutely ridiculous fourth straight 3x3 Europe Cup title.

However the final roster looks like, expect to see some familiar faces who took home the Crelan FIBA 3x3 World Cup 2022 crown.

But there are plenty of challenges, starting with reunited Latvia who have their four Tokyo Olympic gold medalists back after the return of Karlis Lasmanis. 'Batman' got out of his bat cave to walk home from the Montreal Masters 2022 with the MVP just last weekend.

His famous chemistry with fellow superhero Nauris Miezis is straight out of a science class as they once again combined to beat up opponents.

Belgium have taken 3x3 by storm in the last two seasons and their stars took a a big step at the recent Debrecen Masters, where Antwerp claimed a breakthrough title.

Belgium enter with momentum but so too Lithuania who won silver at the World Cup 2022 and boast red-hot flame thrower Marijus Uzupis.

With such headliners it's easy to overlook the Netherlands and host Austria, who both have enough firepower to go all the way.

In the women's, World Cup 2022 champs France are hoping to become only the third country in 3x3 history to win the World Cup and the Europe Cup on the same year (Russia did it with the women, Serbia with the men) and their formidable line-up boast players in their mid-20s who have already tasted loads of 3x3 success.

France's bid for a three-peat last year on home soil was spoiled by Spain, who play with a never say die attitude and that spirit will again be on display in Graz as they seek to go back-to-back.

No.1 seed Germany started bang, bang on the FIBA 3x3 Women's Series 2022 but have been in a drought ever since. They've shown signs recently of recapturing their best and that's perfect timing ahead of the 3x3 Europe Cup.

Rising powerhouse Lithuania just missed the podium at World Cup 2022 but it's made them stronger and they just keep getting better. These lethal Lithuanians believe that gold is their destiny.

Consistent teams Poland and the Netherlands are perhaps just under the contenders but can absolutely go on a giant-killing run.

It just has to start with men's No.1 Strahinja Stojacic, whose Inspector Gadget arms and superhuman athleticism is taking 3x3 to another level. 'Dr Strange' is a 3x3 hero having won three MVPs on this season's World Tour and gold at the World Cup 2022.

The man with the best moustache has one hand on the crown but comeback king Karlis Lasmanis is back where he belongs and he's not lost any of his magic. 'Batman' has his cape on and means business because there are many others who are fighting to sit on 3x3's throne.

His Latvia teammate Nauris Miezis can play the lead role whenever he chooses and might just be the clutchest player ever in 3x3 although lethal lefty Marijus Uzupis is issuing a mighty challenge because this dude doesn't miss when the game is on the line.

We haven't even mentioned Thibaut Vervoort aka 'Must See TV' and Dimeo van der Horst yet - two flat out walking buckets who might be the smoothest scorers in 3x3.

In the women's, France's Laetitia Guapo is a 3x3 Wonder Woman having claimed the MVP at the World Cup 2022. Another trophy in Graz will surely put her in the GOAT conversation and that's mightily impressive for Guapo who is still a month shy of turning 27.

For the last two seasons, Germany's Sonja Greinacher has been bullying defenders in the paint like they are in kindergarten. She's consistently been the No.1 ranked player (until Michelle Plouffe of Canada dethroned her earlier this week) but is desperate for international competition glory after Germany fell just short in a silver medal effort at FIBA 3x3 Europe Cup 2021.

The depth of talent in women's 3x3 is insane right now with Lithuania's Kamile Nacickaite on an absolute tear as she climbs the ladder quickly.

Last but certainly not least, Sandra Ygueravide is the reigning Europe Cup MVP and somehow keeps getting better. She's added to her bag of tricks as the speedy Spaniard guns for a second straight MVP.

It all adds up to the most star-studded Europe Cup we've ever seen, so buckle up and enjoy the ride.