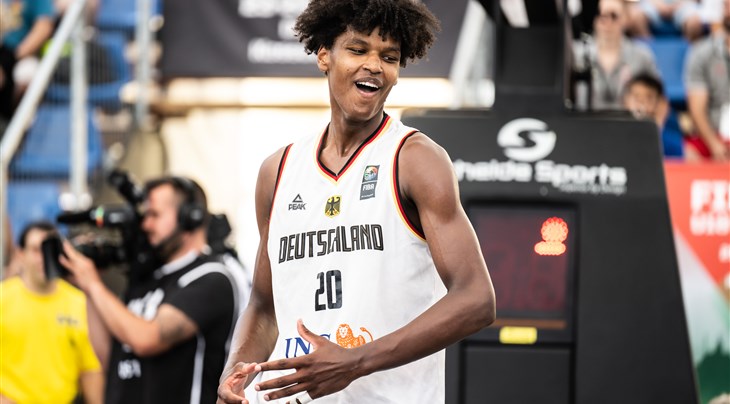 ATHENS (Greece) - Young and eager to shine on the big stage, some of the hottest 3x3 talent will be fighting for continental supremacy at the FIBA 3x3 U17 Europe Cup 2022 in Athens.

Let's take a closer look at all the main details for this major youth event that we are hyped for.

Who is competing in Athens?

There are 12 men's and 12 women's teams competing in Athens.

In the men's, No.2 seed Germany look mighty tough to beat after they dominated the qualifier in Szolnok, Hungary, and have maybe the best player in the draw in highlight machine Fabian Giessmann.

Germany aren't the only favorites with Estonia boasting top billing after impressing during the qualifier in Szolnok. They will be tested early in Pool A against dangerous Lithuania, who have the psychological edge having prevailed in a thriller during the qualifier.

No.3 seed Latvia, Croatia and France loom as serious contenders boasting a bucket load of talent but they are drawn to play one another in an extremely tough Pool C.

In the women's, Germany have the No.1 seed and boast supremely talented Maira Banko, who has shown off her skills at the FIBA 3x3 Nations League 2022 U21 Europe West. Germany will be looking to go one better after winning silver at FIBA 3x3 U17 Europe Cup 2021.

Like their male counterparts, No.6 seed Lithuania have a tall and athletic team who enjoyed an unbeaten run during the qualifier. They face an early litmus test in Pool D against France, who are led by dynamic Lou Bobst.

Defending champs Spain have a totally different team from their memorable triumph in Lisbon but will be confident of repeating. They will be reliant on towering Judit Oliva, who helped Spain win a bronze medal at the 3x3 U18 World Cup last week. We touched on him earlier, but Fabian Giessmann is such a human highlight reel that you better jump on the bandwagon before it's too full. The explosive 6ft. 9in (2.05m) Giessmann helped Germany reached the quarters of the U18 World Cup 2022 and he's determined to lead his country to even greater heights in Athens.

But we can't just give hand him the crown because Poland's Joshua Ashaolu also known as 'Money in the Bank Jr' (a reference to 3x3 OG Michael Hicks) is one nasty baller who has a deep bag of tricks.

Like Giessmann, Lou Bobst deserves another mention because this Frenchwoman has the sweetest jumper and her dishes are Michelin Star level.

You better get ready for lethal lefty Juste Jocyte, who is a basketball prodigy and at just 16 has already played for Lithuania's senior basketball national team.

The 6ft. 2in (1.88m) Jocyte just isn't fair because she already has the maturity and skill set of a player a decade older. She can hit buckets from everywhere and... I mean, just look at that mixtape:

We saw glimpses of her potential at U18 World Cup 2022, as she helped the Netherlands make a quarter-final run, but Phoenix Stotijn was just getting started and she's ready to go up another level in Athens.