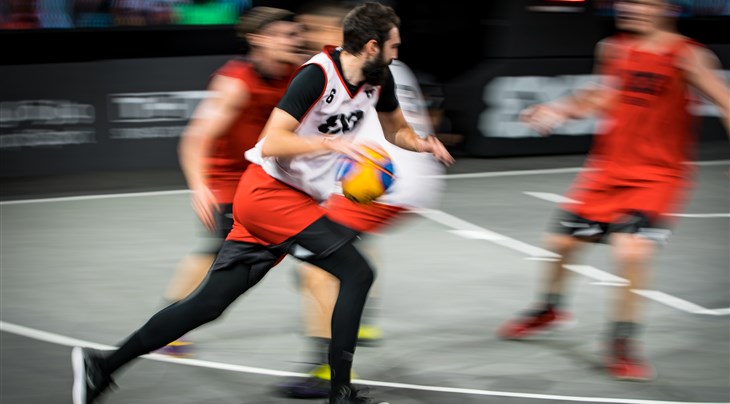 PARIS (France) - After a decade in the making, the FIBA 3x3 World Tour arrives in France for the first time and the hype is in overdrive ahead of the Paris Masters on October 7-8.

Here are all the important details you need to know about the ninth event of the season.

Where can I watch the Paris Masters?

Who is competing in Paris?

Some of the very best 3x3 teams are in this draw but we just have to start at the top and with No.1 seed Ub (SRB). They've had a breather from the World Tour after collecting more cheques than a bank during a dominant first half of the season.

They've brought to Paris their A-Team whose almost perfect chemistry has made you believe they've been playing together for years.

It's going to take something special to knock them off, but No.2 seed and World Tour reigning champs Liman (SRB) regained that winning feeling on the World Tour with a triumph in Utrecht. You know their names because these Serbs are some of the very best in the business and if they start translating their form from Challengers - where they are on a 25-game winning streak - then it's trouble for opponents.

Another mouth-watering match up between Ub and Liman could well happen in the final but the draw is deep and rivals will be determined to knock off the world's two best teams. No.3 seed Vienna (AUT) might be their biggest challenger although the improved Austrians are without high-flyer Filip Kramer.

But don't worry because 3x3 great Stefan Stojacic is out to prove he can match his little bro and current No.1 Strahinja. The former Liman star has led Vienna to a consistent season but they are desperate for a first triumph on the World Tour.

Another hungry team is Princeton (USA) who have regained their mighty form from 2019 but fallen short of going all the way so far this season. They have a trio of winners from FIBA 3x3 World Cup 2019 but also new blood with Isaiah Wilkerson proving stronger than a bull when he's in the paint.

You want dark horses then we have a couple. Actually, it's probably unfair to label them that because hometown heroes Paris (FRA) and Utrecht (NED) have already created serious damage in their World Tour debuts and are the real deal.

Who are the best players?

Again, we've got to start at the top and No.1 Strahinja Stojacic still sits on the throne after being the best player alive in the first half of the season. This lean and mean superstar was making this ridiculously tough game look so easy as he toyed with opponents. He's number on the season in points, key assists, player value, triple-fives. You name it.

We bet 'Doctor Strange' has been adding to his bag of tricks, so don't be surprised if he does the impossible and goes up another level.

Liman have their own stars to throw at Stojacic and his partner-in-crime Dejan Majstorovic with sharpshooter Stefan Kojic walking home with MVP in Utrecht, while big fella Mihailo Vasic is a bully ball expert in the paint.

The Americans are well represented and have two of their best ever with Princeton's Kareem Maddox an OG 3x3 unicorn who can do it all on the half-court, while NY Harlem's Dominique Jones will surely do something crazy.

'Disco Domo' is one of the most entertaining players we've ever seen in 3x3 but he has serious competition in Paris with newcomers Paul Djoko from Paris and Utrecht's Worthy de Jong lighting up Utrecht in their World Tour debuts.

The talent in Paris is off the charts for one of the most anticipated World Tour events of 2022.