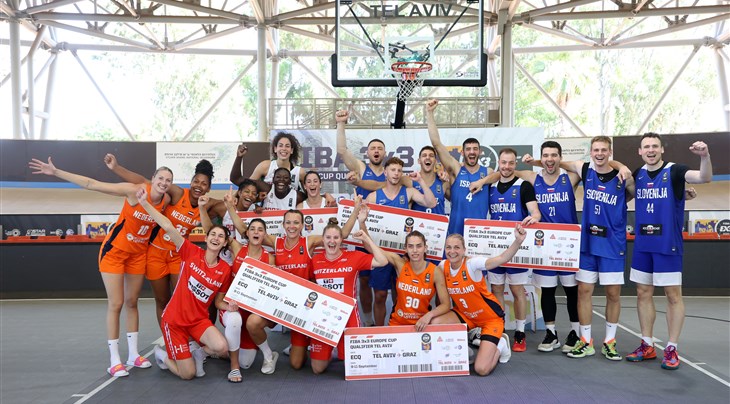 TEL AVIV (Israel) - Netherlands, Portugal and Switzerland's women, together with Israel and Slovenia's men are the first 5 teams to qualify for the FIBA 3x3 Europe Cup 2022 from the Israel Qualifier, which took place in Tel Aviv on June 3-4.

Switzerland's women finished first in a super-competitive women's category where no team finished undefeated. Swiss star Marielle Giroud ranked second in points per game and sank the winning free throw in the decider against Portugal. 2017 silver medalists Netherlands showed their resilience after scoring just 9 points in an opening loss against Portugal. The team won their next 3 games, including the decider against Lithuania. 'The Duchess' Natalie Van den Adel led the team in scoring and finished 5th overall in points per game. Portugal's women will be at the FIBA 3x3 Europe Cup for the first time after defeating Lithuania in the last ticket game 13-8. Márcia Costa topped the team in scoring and Joana Soeiro broke the Internet with an inspired post-game celebration.

And that's a wrap 🙌🇵🇹

🎉 @fpbasquetebol are the last team to stamp their tickets to the #3x3Europe Cup! Congratulations 🎉 pic.twitter.com/ANdWPJY6s0

In the men's category, both Israel and 2016 winners Slovenia earned their ticket to Graz. Israel's men were the only team in the entire event to stay undefeated. Slovenia had the upset of the tournament when they beat France in the quarter-finals and went on to defeat Switzerland in the decider. Switzerland's Marielle Giroud and Israel's Joaquin Szuchman were named MVPs of the competition. Lithuania's women and Switzerland's men still have a chance to make it to the Europe Cup since the best third in the men's category and the best fourth in the women's category (comparing the Israel Qualifier and the Romania Qualifier, which ends on Sunday) also earn their ticket to Austria.

The winner of the Limassol Qualifier and the winner of each semi-final in Constanta (Romania) will qualify directly as well.