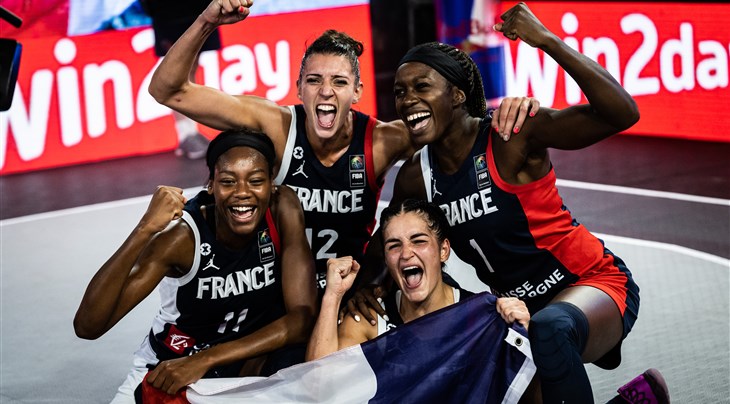 MIES (Switzerland) - Before we get our party hats on for New Year's Eve, let's celebrate five women's 3x3 teams who defined 2022.

It was their first World Cup triumph and redemption for Guapo, who was part of France's disappointing Tokyo Olympics campaign where they missed the podium.

But France weren't nearly done as they joined Serbia men's team to claim double delight with victory at the FIBA 3x3 Europe Cup 2022. It was their third Europe Cup title after beating the Netherlands in the final (21-14) with 24-year-old Myriam Djekoundade winning MVP.

They also finished second in the FIBA 3x3 Women's Series 2022.

Perhaps most impressively, France have a wealth of talent and their next-gen look mightily impressive after completing the U23 double with victories at the FIBA 3x3 Nations League 2022 and FIBA 3x3 U23 World Cup 2022 and also the 3x3 U17 Europe Cup in Athens.

France are well built to dominate women's 3x3 for years to come.

Canada ends 2022 as the No.1 ranked women's team and it's a status that is well deserved after a momentous year for them.

After the heartbreak of falling short in an epic final at Crelan World Cup 2022, Canada came back stronger to gain revenge over arch-rival France and win the Women's Series 2022.

They also won the FIBA 3x3 AmeriCup 2022 to cap an outstanding year. World No.1 Michelle Plouffe stamped herself as the best women's player alive with continual dominant displays to fuel Canada's incredible 2022.

We all know mighty USA have the most hoops talent at their disposal. While it hasn't always translated to ultimate success at senior levels of 3x3, USA have utterly dominated the FIBA 3x3 U18 World Cup.

It was no exception in the 2022 edition with USA's talented teens going all the way after riding the hot hand of Mikaylah Williams, who was named MVP in the event for the second straight year.

USA's domination of the event continued with their fourth title in a row and sixth overall.

China women's team have long proved they love the big stage. They won gold at the FIBA 3x3 World Cup 2019, bronze at the Tokyo Olympics and Crelan World Cup 2022.

But they had missed out on Asia Cup success until this year, where they were never really seriously challenged in Singapore to cement their status as Asia's powerhouse women's team.

They impressively beat defending champions Australia twice, including in the final, with superstar Lili Wang winning the MVP.

China undeniably continue to set the standard in Asia.

The best story in women's 3x3 this year? It might just be Indonesia, who had a fairy tale run at the Asia Cup as they reached the podium for the first time ever to win bronze.

Kimberley Pierre-Louis lived up to her nickname of 'Buckets' with an insane 54 points in 5 games to steal the show in Singapore and inspire the hugely populated southeast Asian country to extraordinary heights.