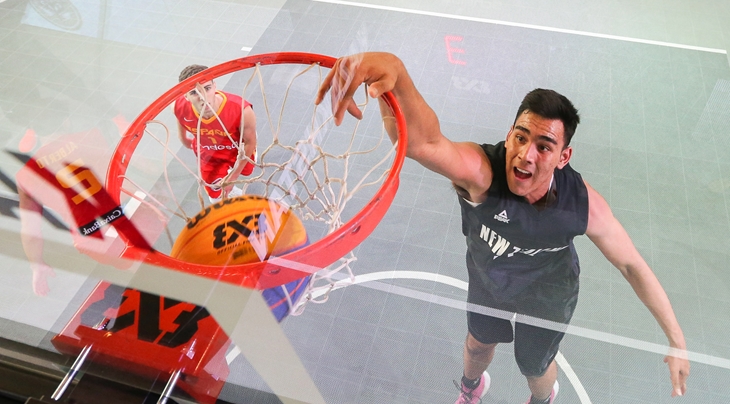 DOHA (Qatar) - As a teenage prodigy, Tai Wynyard showed off his brute strength and sweet skills for a big fella by leading New Zealand to glory at the FIBA 3x3 U18 World Cup 2015.

Seven years later, the 24-year-old is hoping a return to 3x3 can help relaunch his hoops career, which stalled after a long layoff due to a back injury. But feeling healthy, Wynyard is hoping to help New Zealand qualify for the FIBA 3x3 World Cup 2022.

Wynyard joins forces with Taylor Britt, Nikau McCullough and Dominique Kelman-Poto as the 'Tall Blacks' look to book a berth to Antwerp during the FIBA 3x3 World Cup Qualifier Asia 2022 in Doha on March 25-26.

"I do rehab every day for the back and the body is feeling great," Wynyard said. "I'm looking forward to proving myself as a player again and really excited to be back playing 3x3."

With Covid-19 restrictions still strict in New Zealand, the Tall Blacks haven't been able to train as a team yet and will only come together once they arrive in Doha. But they have been busy scouting their opponents and are readying themselves for the challenge.

"Kazakhstan are quite small, so we expect them to run and gun," Wynyard said. "We noticed Qatar don't have Seydou Ndoye, who I went up against at (FIBA 3x3 U18 World Cup 2016) and it would have been good to play him again.

"We are doing a lot of scouting and want to be prepared for anything in case we have to adjust on the fly."

Having not played 3x3 on the big stage in six years, Wynyard knows the 21-point game has evolved significantly since he was dunking and blocking opponents at the under age level.

"3x3 has changed so much and there is much more strategy to it now and also players can do a bit of everything," he said. "We know we will have to shoot the two from all positions and be mobile. Being disciplined will also be key and we have got to be careful we don't get into foul trouble."

3x3 may have changed but it should bring back pleasant memories for the 6ft. 10in (2.08m) giant, who dished up one of the most dominant performances seen by a teenager when in 2015 he claimed MVP honors in Debrecen, where New Zealand edged Argentina in a classic 20-18 final.

He again showed off his inside dominance 12 months later in Kazakhstan but New Zealand's title defense fell short when they lost to Qatar in the semi-finals. Wynyard, tipped to follow in the footsteps of his compatriot Steven Adams into the NBA, then embarked on a college career in the USA with famous Kentucky who were led by iconic coach John Calipari.

"Those guys were crazy athletes and just practicing with them makes you better," he said. "It was a really cool experience to see what is needed to be a professional athlete."

Even though blessed with powerful genes with his dad a former world champion woodchopper, Wynyard was not immune to injuries and a serious back injury cut short his career. But a recent comeback, including representing New Zealand at the FIBA Basketball World Cup Asian Qualifiers, has rejuvenated him as he eyes a potential 3x3 career.

"Hopefully, I can play solidly in Doha and establish myself as a 3x3 player and that might open up some options," he said. "I really enjoyed playing 3x3 and can't wait to get back playing it and see how I go."

With 3x3 seriously emerging in New Zealand, Wynyard and his teammates know what qualification to the World Cup in Antwerp will mean for a country with a population of just five million.

"We are a small country but we have a big heart," he said. "If we can make a World Cup then we can show what can be achieved by playing 3x3."

But before those dreams, Wynyard will be in Doha issuing a reminder to fans that he's still one big problem on the 3x3 court.