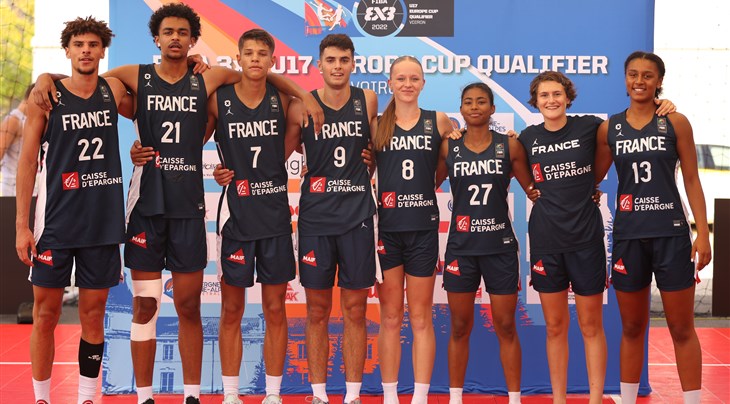 VOIRON (France) - France and Poland accomplished something special last weekend: both their men and women's national teams earned their ticket to the FIBA 3x3 U17 Europe Cup 2022 at the France Qualifier in Voiron on August 6-7.

France's women were among the most dominating teams in Voiron. In fact, only 3 other squads remained undefeated (Czech Republic's women, Croatia and Israel's men). They had a perfect 4-0 record, thanks to their top scorer Margot Ounounou and the highlight machine Lou Bobst.

Les Bleuets bounced back after an opening loss against Israel (21-19) with two blow-outs of Switzerland and Poland. Theo Pierre-Justin got so many buckets, he finished second overall in scoring in Voiron.

Both Polish teams qualified the hard way and had to win a few extra games to qualify. The men finished 3-1 and had to beat Portugal (who had just eliminated Spain) in the decider, while the women survived a nerve-wrecking overtime against Turkey (14-12) to stamp their ticket to Greece.

Who qualified in Voiron?

Women: Czech Republic (who won their 4 games by more than 10 points!!!), France, Poland and Slovenia

Who were the top scorers?