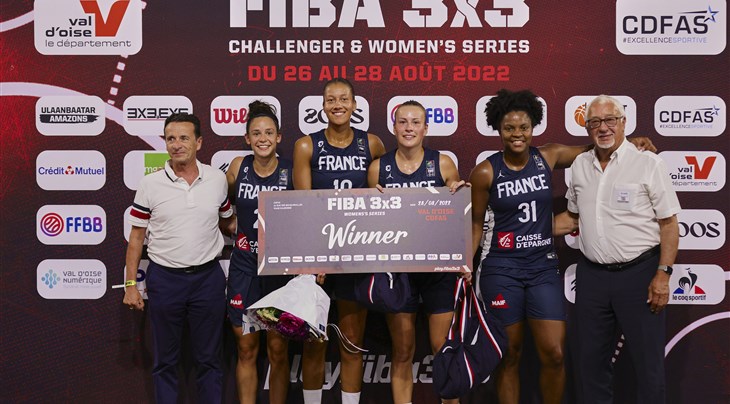 The Women's Series continues to be absolutely unpredictable: 10th stop of the season and already 8 different winners. France U24 - which qualified for the Women's Series after winning the Nations League in 2021 - won an event, which featured all three of the Crelan FIBA 3x3 World Cup 2022 medalists (France, Canada and China)! After losing their opener against Canada, France U24 won their next 4 games, including a semi-final win against the European reigning champs Spain (16-11). In the title game, they met giant-killers Dusseldorf Zoos (GER), who had eliminated Canada in the semi-finals on a buzzer-beating shot from behind the arc, courtesy of Japanese sharpshooter Yuka Maeda.

With the game tied at 12 with 2 minutes to go, 22-year-old Emma Peytour took over. She scored 7 of France U24's next 9 points, including a clutch two-pointer with 19 seconds to go and the game-winning free-throw. Peytour had 9 points in the final and was awarded the MVP trophy after finishing second in scoring and third in player value (Canada's Michelle Plouffe ranked first in both categories).

Reaching the championship game in Eaubonne means that both teams still have a chance to qualify for the Women's Series Final. With just 1 stop to go, 7 teams have already secured their ticket to Constanta: Germany, France, Canada, USA, Lithuania, Spain and the Romanian hosts.

This leaves 5 teams for 1 ticket. China currently rank 8th but will not compete in the last stop next week in Montreal. The other 4 will play in Canada. Dusseldorf Zoos are in the driver's seat since they rank the highest (10th) of all active contenders. The next in line are Hungary (11th), France U24 (14th) and the Netherlands (17th).